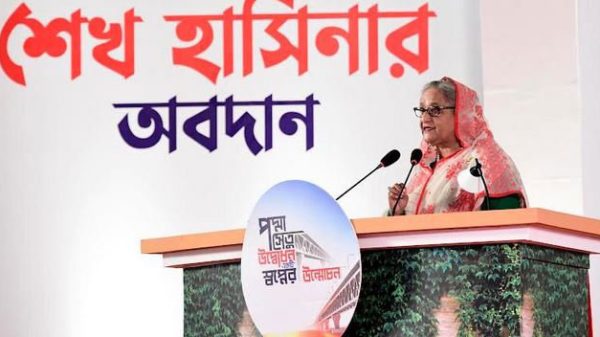 Prime Minister Sheikh Hasina today called the Padma Bridge as a “symbol of pride, honour and ability” of Bangladesh as the much-hyped bridge now stands on the mighty Padma river confronting all the conspiracies.

“Ignoring many obstacles and breaking the web of conspiracy, today the much-desired bridge stands on the chest of turbulent Padma River,” she said in a gathering of dignitaries marking the grand opening of the Padma Bridge.

Mentioning that the bridge is not just a brick-cement-steel-iron made concrete infrastructure, the prime minister said, “This bridge is a symbol of our pride, our honour and ability.”

“Today, I am happy, proud and overwhelmed along with millions of people of the country,” she added.

The bridge belongs to the people of Bangladesh and it involves our passion, creativity, courage, endurance and perseverance of all, she said.

“Because, you (countrymen) are by my side, I have the courage to make this impossible possible. And my father, the Father of the Bangalee Nation, Bangabandhu Sheikh Mujibur Rahman and my mother Begum Fazilatun Nessa have given me courage and blessings from the heaven,” she said

The prime minister said the construction of the bridge has been delayed due to the conspiracy, adding, “But we were not disheartened.”

On this historic day of the inauguration of the Padma Bridge, she said,”Let us take fresh vow to work for the welfare of the country and the people of the country.”

At last, she said that the people of Bangladesh saw the light breaking the darkness.

“Red, blue, green and golden lights are shining in the chest of the Padma,” she continued.

The country, which was liberated by my father, can not be deprived anymore, she said.

The premier hoped that the people who opposed the construction of Padma Bridge would be more responsible.

“My family members, younger sister Sheikh Rehana and her son Radwan Mujib Siddiq, my son Sajeeb Wazed Joy and daughter Saima Wazed Putul, and some of my colleagues, including my Economic Adviser Dr Moshiur Rahman, former Communications Minister Syed Abul Hossain and Communications Secretary Mosharraf Hossain Bhuiyan, suffered extreme mental agonies because of the conspiracies orchestrated by certain quarters at the planning stage of the construction of this bridge,” she said.

Cabinet Secretary Khandker Anwarul Islam delivered the welcome address at the function with Road Transport and Bridges Minister Obaidul Quader in the chair.

At the outset of the function, the theme song was also played while a documentary on Padma Multipurpose Bridge was screened.

The prime minister called the 41 spans of the bridge as the reflection of daring Bangladesh, quoting Father of the Nation Bangabandhu Sheikh Mujibur Rahman as saying, “None could keep Bangalees suppressed”.

“And finally, we have become victorious,” she said.

In the language of the poet of youth and the poet of rebellion Sukanta Bhattacharya, she said: “Bravo, Bangladesh, this world looks surprised: Burnt to get ashes, yet not to bow the head.”

The Bangalee nation never bows its head and the Father of the Nation did not bow his head as he did not teach us to bow our head, Sheikh Hasina said.

“Standing on the gallows, he (Bangabandhu) sang the triumph of life,” she continued.

Under his leadership, Bangladesh has snatched the red sun of independence through 23 years of political struggle and nine months of liberation war, she said.

Following his footsteps, Bangladesh today stands with its head high in the comity of nation, she added.

“On this day of joy, there is no hatred, no animosity towards anyone. I would like to express my deepest gratitude to the people of the country,” the prime minister said.

She also said, “Having lost my parents and relatives, I came into politics hoping to do something for the people of this country”.

She said she has been working with the aim of establishing a happy and prosperous golden Bangladesh as dreamt by the Father of the Nation.

“Today, I will just pray that good sense will prevail upon the conspirators. They should not play with the fate of the common people,” she said.

She further said that today Bangladesh has qualified to become a developing country from least developed one.

By 2030-31, Bangladesh will emerge on the world map as a high-middle income country with SDG implementation and by 2041 as a developed and prosperous country, InshaAllah, she added.

After the launch of the bridge, it will be possible to establish direct communication between the capital Dhaka and 21 districts in the southern part of the country by road and rail, she said.
The premier said that this will end the long-standing sufferings of the people of the region on the one hand, and accelerate the economy on the other hand.

“Their business will expand and their standard of living will be improved. The bridge is expected to contribute 1.23 percent to GDP growth and reduce poverty per year,” she said.

New economic zones and high-tech parks will be built centering the bridge, she said, adding that as a result, domestic and foreign investment will be attracted and the pace of industrialization of the country will be accelerated.

Sheikh Hasina went on saying that the Padma Bridge is a major link to the Asian Highway.

“So, the role of this bridge in regional trade is immense. Moreover, the tourism industry will also flourish on both sides of the Padma,” she said.

The premier said he (Bangabandhu)  took the initiative to build an uninterrupted and effective communication and transportation system.

She stated that it was Bangabandhu Sheikh Mujibur Rahman  who  announced  construction of a bridge over the river Jamuna.

During his official visit to Japan in October 1973, she said that Bangabandhu sought Japan government’s assistance to build a bridge over the river Jamuna.

After  Awami League government took charge in 1996, the construction work of Bangabandhu Jamuna Multipurpose Bridge was completed and on 23rd June 1996, she said, adding, “I inaugurated the bridge.”

“At my request the construction work on the river Rupsha started during   that tenure. As  the Padma is a very turbulent and vast river, it was necessary to carry out feasibility study,” she said.

Japan completed a survey in mid-2001 and selected Mawa of Munshiganj as the proposed bridge site, she said.

On the basis of this survey, on July 4 in 2001,  the premier officially laid the foundation stone of the Padma Bridge at Mawa point.

“But we could not come to the government in the 2001 elections. After coming to power, the BNP-Jamaat alliance government stopped the work of a bridge at Mawa,” she said.

They asked the Japanese government to re-survey the Padma river to construct the bridge at Aricha in Manikganj, she informed.

After the second survey, Japan again has chosen  Mawa for construction of Padma bridge, she said.

After assuming power again in 2009, she said, “We started the work by putting the construction of Padma Bridge on the list of highest priority. A consultant firm was appointed to design the bridge within 22 days formation of the government  .”

“But at the instigation of some conspirators, bringing baseless corruption charge, the World Bank, abruptly, announced that it would not finance the project. Later, other development partners followed the World Bank,” she said.

Then the situation has been muddled a lot. Representatives of a section of the so-called civil society, some media outlets, and self- proclaimed economists were merciless in criticizing the government, she said.


The Anti-Corruption Commission investigated and found that no corruption had taken place, she said.

“But no one believed them. But when a Canadian court in its verdict said there was no corruption in the Padma Bridge, and then everyone became silent. There is no word in anyone’s mouth.

They did not express the slightest remorse for the mental torture   suffered some of our colleagues ,” she said.

She said that she knew there was no conspiracy of corruption in the Padma Bridge project.

“And this is why I insist on building this bridge. When everyone is frustrated, I announced the construction of the Padma Bridge at our own fund. Not only that, we informed that no money will be taken from any foreign organization for construction of this bridge,” she continued.

After this announcement, you have seen how some people have said various pessimistic and depressing remarks , she said.

In addition, she said that they predicted that if this bridge was built with our own fund, the economy and progress of Bangladesh would come to a standstill.

“Today the Padma Bridge has been built. Bangladesh’s economy has not collapsed,” she said.

The Prime Minister said that Bangladesh is moving forward at a breakneck pace,

“To the world, we have proved that ‘we can do too’. The Padma Bridge is therefore not only a bridge to prove self-respect and our ability, but also a revenge for insulting the whole nation. The people of Bangladesh are the source of my courage,” she said.

Padma River is 4 to 4.5 cubic meters per second.

The Padma is the most turbulent and unpredictable river in the world after
the Amazon, she said.

So,  Its implementation was really a huge challenge considering the various technological and technical issues, she said.

“The construction work of Padma bridge had to be completed by facing these challenges,” she said.

The Premier said that they have taken appropriate measures to rehabilitate the families directly and indirectly affected by the land acquisition.

Residential and commercial plots have been allotted to the landless and affected families, she said.

Additional assistance, homestead development assistance have  been provided, she said, adding, “Various career-oriented and income-generating trainings have been provided to them to improve their quality of life.”

Forestry programs have been implemented in the project area under environmental management activities, she said.

“A museum will be set up in the project area to preserve the history and specimens of biodiversity,” she stated.

We have already declared the project area as ‘Padma Bridge Wildlife Sanctuary’ for conservation of flora and fauna, she said.

Built with the best technology in the world, this spectacular two- storey Padma bridge has been constructed in steel and concrete structures, she said.

The Premier said, that the multipurpose bridge will have vehicles on the upper deck and trains on the lower deck.
Senior military and civilian officials, diplomats, representatives of international organizations and heroic freedom fighters, were present.