Patriotism is must for country’s development: PM 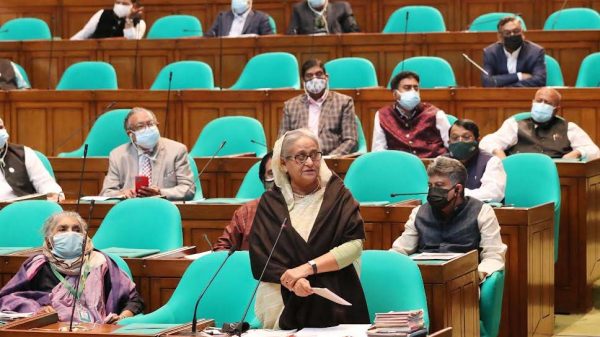 Patriotism is must for country’s development: PM

patriotism and loyalty is must for the country’s development.

“(You) have to be loyal for the country’s development. (You) must have
patriotism. The development of a country can be done only being imbued with
patriotism,” she said.

The premier made this remark at the Parliament while participating in the
discussion on a condolence motion over the death of sitting Awami League (AL)
lawmaker Md Akabbar Hossain elected from Tangail-7 constituency.

She said development of the country was only possible when the work would
be done with honesty.

“Without it (honesty) development is not possible, which we’ve witnessed in
the 21 years after 1975 (brutal killing of Father of the Nation Bangabandhu
Sheikh Mujibur Rahman),” she said.

Referring to the country’s uplift that has been achieved only in the last
12 years, Sheikh Hasina said, “This development was not possible if we would
not have worked with honesty and loyalty.”

The prime minister said they have also seen in the country that the money
of own country was handed over to others and again that money was taken as
commission. “There can be no more shameful thing than this,” she said.

“. . . Now we are realizing that how much honest and devoted leadership is
needed for the country,” she said.

The country is lost a leader at the demise of Akabbar Hossain who could
contribute more to the development of the country, she noted.

Calling him as an honest and sincere politician, Sheikh Hasina told the
Parliament that his demise is a huge loss to the party and also to the
country.

“Akabbar was one of them who had political wisdom, foresightedness,
honesty, sincerity and ideology to lead the country particularly Awami League
after our generation,” she observed.

She said it is really very tough to accept the loss of an honest and
sincere politician like him.

“It is unfortunate for us that we lost such an activist, which is a huge
loss to our party and also to the country as it is essential to have
sincerity and patriotism (among the political leaders) to make development of
the country,” she said.

The prime minister said Akabbar had a very deep-rooted relation with the
people and his constituency saw significant development during his tenures.

“When he spoke, he did so politely. He was very calm and polite,” she
said.

She prayed for eternal peace of the departed soul and conveyed deep
sympathy to the bereaved family.

The leader of the house said it is very unfortunate that some 20 lawmakers
of the current parliament died, which is an unusual matter.

“It is very unfortunate that we lost 20 lawmakers of this parliament,” she
said, mentioning a list of the 20 parliament members who passed away since
2019.

Earlier, Speaker Dr Shirin Sharmin Chaudhury moved the condolence motion
to the House in the beginning of the day’s session.

A one-minute silence was observed and a munajat was offered seeking
eternal peace of the departed soul of the four-time lawmaker.

The Parliament unanimously adopted the obituary motion expressing profound
shock at his death.

Later, the JS session was adjourned after the adoption of the condolence
motion over the death of the sitting lawmaker as per the tradition.

Md Akabbar Hossain, 65, died in a city hospital on Tuesday. He was the
chairman of the Parliamentary Standing Committee on the Road Transport and
Bridges Ministry.

Akabbar was born on July 12, 1956 at Postkamuri village in Mirzapur under
Tangail district. He obtained BSS and MSS degrees from Social Sciences in
Dhaka University.