Pelosi names destinations of her trip amid Taiwan row 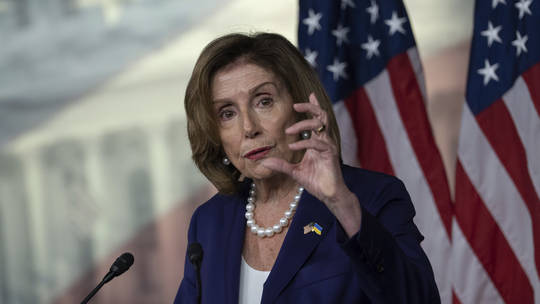 Pelosi names destinations of her trip amid Taiwan row

The US House speaker did not mention the island in the latest update on her Asia visit.
Speaker of the US House of Representatives Nancy Pelosi has revealed the schedule for her trip to Asia. China earlier promised a strong reaction if the high-ranking politician visits Taiwan.

In a tweet posted on Sunday, Pelosi said she will stop in Singapore, Malaysia, South Korea, and Japan, where she will “hold high-level meetings.”

The news comes after reports that Pelosi could make an unannounced visit to Taipei as part of her trip.

China considers Taiwan, which has been ruled by a separate government since the late 1940s, part of its territory. Beijing strongly opposes any form of diplomatic recognition of Taiwan, including visits by foreign officials.

I’m leading a Congressional delegation to the Indo-Pacific to reaffirm America’s unshakeable commitment to our allies & friends in the region. In Singapore, Malaysia, South Korea & Japan, we’ll hold high-level meetings to discuss how we can further our shared interests & values.

In a phone conversation on Thursday, Chinese President Xi Jinping warned his US counterpart, Joe Biden against visits to Taiwan and recognizing the island’s “independence.”

“Those who play with fire will perish by it. It is hoped that the US will be clear-eyed about this,” Xi said, according to the official readout of the call.

While not formally recognizing Taiwan as an independent nation, the US has been supporting the island’s government by selling weapons to Taipei.

Beijing conducted live-fire military drills on Saturday off the coast of the southeastern province of Fujian, just across the strait between the mainland and Taiwan. The move came after reports said that China could send warplanes to “escort” Pelosi’s aircraft and prevent it from landing in Taiwan should she attempt to do so.