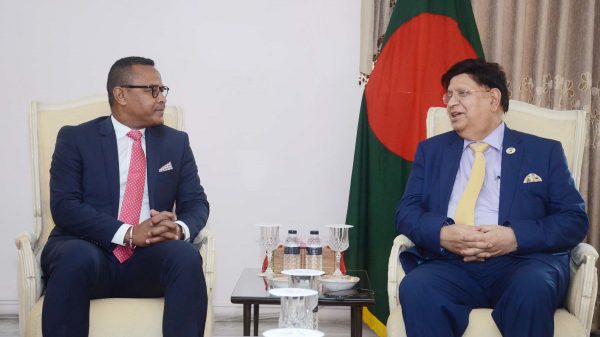 At the outset of the meeting, Dr. A K Abdul Momen said, Bangladesh has achieved tremendous socio-economic progress during the last decade. He also said, that Bangladesh has expertise in IT & ICT sector and the government is offering various types of digital services to the people. He suggested that both countries may establish cooperation in IT and ICT sector and Madagascar may import RMG and pharmaceutical products from Bangladesh.

The Permanent Secretary of Foreign Ministry of Madagascar briefed about the measures taken by the government of Madagascar in order to contain the spread of Covid-19 pandemic. He congratulated Bangladesh government for the measures undertaken by the government of Bangladesh for containing the spread of Covid-19 pandemic. Mentioning Madagascar and Bangladesh are working together at international platforms on matters of mutual interest, Ratsimandao Tahirimiakadaza commended the role of Bangladesh at IORA in protecting interest of the developing countries.

Ratsimandao Tahirimiakadaza proposed both countries may establish in cooperation in blue economy including cooperation between maritime universities as well as in extraction of marine nutrients. He suggested establishing G2G cooperation with Bangladesh in IT and ICT areas.

Recognising the importance of cooperation in agriculture areas both side agreed to establish cooperation in food and agriculture areas including cooperation in seed technology and agricultural production, Dr. Momen suggested a Fact Finding Mission may go to Madagascar to discuss the possibilities of contract farming opportunities. He also sought continued support of Madagascar on the Rohingya repatriation issue. The Permanent Secretary assured of their continued support to Bangladesh on the Rohingya issue. Dr. Momen also sought support of the Madagascar government in favour of the candidature of Bangladesh at the forthcoming IMO election as well as at Humans Right Council.