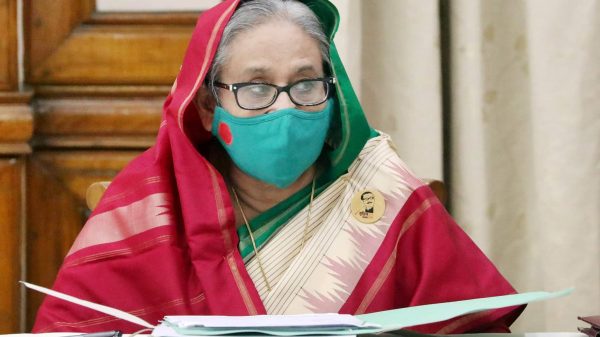 Prime Minister Sheikh Hasina today asked the
Bangladesh Army to remain always prepared to make the supreme sacrifice in
any need of the nation alongside protecting the country’s sovereignty.

“I believe, Bangladesh army will always remain prepared to make the
highest sacrifice in any need of the nation alongside protecting the
sovereignty of Bangladesh,” she said.

The prime minister was addressing as the chief guest a ceremony of handing
over new flags to “Mujib Artillery Regiment” and “Rowshan Ara Artillery
Regiment” and national flag (national standard) to 10 units of Bangladesh
Army, joining virtually from her official Ganabhaban residence here.

The function was arranged at the Artillery Centre and School at Halishahar Cantonment in Chattogram.

She said Bangladesh army has been playing a pivotal role in facing the
natural and man-made disasters and the country’s socio-economic,
infrastructural and communicational development alongside guarding the
country’s sovereignty.

She added that the army personnel have also played crucial role in
preventing the Coronavirus under the Operation Covid Shield.

The prime minister appreciated Bangladesh military personnel for earning
global honour and dignity for the country by performing their duties with
utmost professionalism.

She added: “Bangladesh Army by their sacrifice, dutifulness and
professionalism in performing duties in establishing world peace and in
foreign missions has achieved honour and dignity for the country, brightening
its image in the international arena.”

The prime minister said the “humanity of our military personnel” also
impresses the commoners of those countries they are working for.

At the end of the programme, Chief of Army Staff General S M Shafiuddin
Ahmed gave a vote of thanks to the premier.

The premier virtually witnessed a smartly turned out parade of the members of the units.

Mentioning her family relations with the army, Sheikh Hasina said, “My two
brothers (Sheikh Kamal and Sheikh Jamal) were the members of army while my
youngest brother (Sheikh Russel) had a dream to be an army man. But his dream
was not materialized (as Russel along with father, mother and brothers were
brutally killed on August 15 in 1975.)”

The prime minister said after the Liberation War, Bangabandhu only got
three and a half years to build a province as a state and establish various
organizations such as the armed forces.

She continued that Father of the Nation Bangabandhu Sheikh Mujibur Rahman
wanted to build a powerful armed forces, for which, he established Bangladesh
Military Academy in Cumilla Cantonment in 1972.

The premier quoted Bangabandhu as saying, “The military academy will be
famous in the world and people across the globe will visit it.”

She said following the footsteps of the Father of the Nation, her
government has carried out massive development in the armed forces in the
last 13 years.

She also said in keeping pace with the developed world, the government has
incorporated state-of-the-art weapons, military aircrafts and helicopters as
well as modern infantry gadgets and engineering equipment.

On the basis of the defense policy of 1974 formulated by Father of the
Nation Bangabandhu Sheikh Mujibur Rahman, she said her government has
formulated the new “National Defense Policy, 2018” and the Force Goal-2030,
which is now being implemented.

Sheikh Hasina briefly highlighted her government’s development initiatives
for the armed forces during 1996-2000 and 2009 to present.

She went on saying the government also procured a sufficient number of
Armored Personnel Carriers (APC), Armored Recovery Vehicles (ARV), battle
tanks, helicopters and other necessary armaments and equipment in the army.

The government formulated the “Forces Goal-2030” and has been implementing
it with the aim of building a state-of-the-art, trained and up-to-date
military force, she added.

After handing over the national flags to the army units and new flags to
two the new regiments, “Mujib Artillery Regiment” and “Rowshan Ara Artillery
Regiment”, the prime minister said, “It is the responsibility of you to
maintain the dignity of the flag.”

Regarding the inception of the “Mujib Artillery Regiment”, Sheikh Hasina
said that the regiment of artillery had started its glorious journey through
firing gunshots at the battle field during the War of Liberation in 1971 and
it started working in the name of one field regiment artillery after the war.

The unit had achieved “regiment colour” in 2019 and “national standard” in
2020 for its outstanding performance in various administrative and
operational activities and training, she said.

She continued that the regiment which started its journey through the
Liberation War, has been named “Mujib Regiment Artillery” after the name of
the Father of the Nation.

The prime minister said that “Rowshan Ara Artillery Regiment” was named
after a valiant freedom fighter and Dhaka University student Rowshan Ara
which got “regiment colour” in 2019 and “national standard” in 2020 for its
outstanding performance in various fields.

“I am very happy today to handover new flags to the “Mujib Artillery
Regiment” and “Rowshan Ara Artillery Regiment”, she said, expressing her
heartiest greetings to the members of the regiments.

The premier said Bangladesh has been marching ahead defying hundreds of
odds as they have set a target to turn Bangladesh into a hunger-poverty-free,
developed and prosperous Bangladesh as envisioned by the Father of the
Nation.

She vowed: “Bangladesh will continue to progress with the spirit of the
Great Liberation War and we will move across the globe keeping our heads high
as we are a victorious nation.”