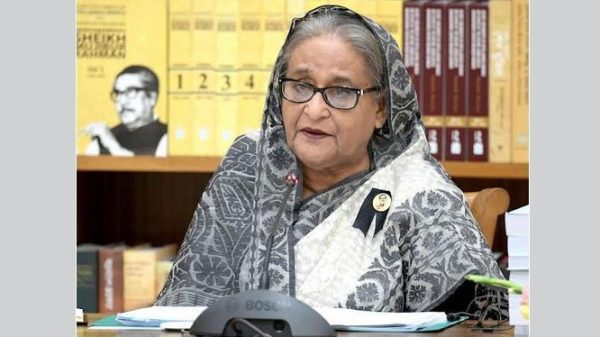 Prime Minister Sheikh Hasina today instructed
authorities concerned to find out a way for importing fuel oil from Russia
amid fuel crisis in the country.

“Due to the Russia-Ukraine war, people are suffering because of the increase
in global oil prices. This is becoming a problem. In the current situation,
India and other countries are buying oil from Russia – so we have to see if
we can buy. For this, we have to find a way,” Quoting the Prime Minister,
Planning Minister MA Mannan told the media after ECNEC meeting.

Mannan informed that in the current situation, the Prime Minister said to
find a way to buy fuel directly from Russia. “Russia says they will go to
currency swap. We may have to negotiate with Russia and find out a policy,”
he added.

Revealing some of the directives from the Prime Minister in the meeting, the
Planning Minister said Prime Minister Sheikh Hasina has directed to take
action against those responsible for the Uttara crane accident.

He said the Prime Minister is shocked by the Uttara incident. “Everyone from
the project manager to the contractor should be brought under investigation.
Those responsible must be punished,” the planning minister quoted the PM as
saying.

Five people including two children were crushed to death after a 50-60 tonne
girder of Bus Rapid Transit-3 (BRT) Elevated Expressway fell on a car at
Uttara’s Jasimuddin road on Monday (15 August).

Highlighting the recent economic data, Mannan said that the steps taken by
the government in the current situation are doing well for the country’s
economy.

“Currently foreign exchange reserves are close to US$40 billion, remittance
inflows are positive. Remittance inflow witnessed 10 percent higher than the
same period of the last year. Export growth and revenue collection are also
good. Considering all the factors, we think – we will not fall into the ditch
but we will improve this situation,” he added.

The minister expressed hope that there will be no loadshedding from
September.