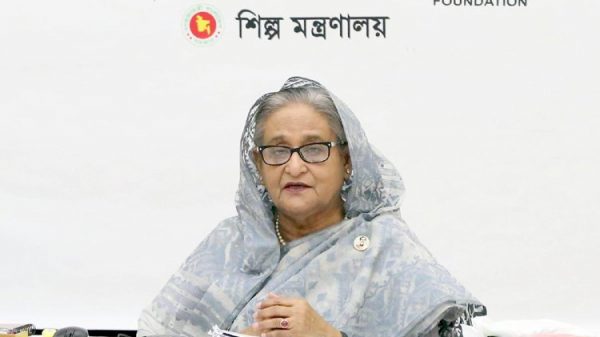 “My call to the young generation is that instead of running after jobs in
completion of academic life, you should put concentration on becoming
entrepreneur and provide job to others, and all of you should prepare
yourself in this way,” she said.

The premier made this call while inaugurating the 8-day National SME Fair-
2021 in city’s Bangabandhu International Conference Centre (BICC) as the
chief guest, joining virtually from her official residence Ganabhaban.

She said the government has taken all types of measures to develop the
interested person as entrepreneur while anyone can be entrepreneur availing
this scope.

Sheikh Hasina said her government has also allocated separate fund in the
budget for “Start Up Programme” so that the young generation can take this
opportunity.

In this connection, she also mentioned the government’s initiatives of
providing technical education and vocational training to the young people
alongside making arrangement of different opportunities both off-line and
online.

The prime minister also asked the officials concerned to pay special
attention to the female entrepreneurs to help them expand their initiatives.

“We’ve kept special arrangement for female entrepreneurs in the 100
special economic zones and they will get special facilities for their
venture,” she said, referring to her initiative of setting up 100 special
economic zones across the country.

At the outset of the function, an audio-visual documentary on SME sector
was screened.

On behalf of the premier, the industries minister handed over crests,
certificates and cheques to four entrepreneurs.

The fair will remain open from 10am to 8pm for all everyday till December 12.

The prime minister said investment-support infrastructure is a
prerequisite for industrialization and that’s why the government is setting
up 100 economic zones in the country to attract domestic and foreign
investment.

She continued, “As a result, Bangladesh is becoming an attractive
destination for foreign investment”.

She added foreign investors are coming forward to invest in Bangladesh
with interest, and many foreign entrepreneurs are showing desire in investing
in SMEs.

Laying emphasis on developing own markets as well as exploring new
markets, Sheikh Hasina said, “When we will find new markets, we have to see
that what kind of products are in high demand in that country and (we have)
to produce such products.”

She also stressed the need of setting up agro-processing industry, saying
that food demand will increase in the world, not rather decrease.

In this connection, she said considering the availability of raw
materials, region based small and medium industries should be set up.

“If only one person gets employment in each organization, then employment
of at least 78 lakh unemployed people can be created,” she said.

She added, “We will provide all possible assistance for the development of
SME clusters and enhancement of infrastructural facilities.”

She also urged all to set up new factory in the industrial park instead of
building those haphazardly as entrepreneurs will get benefit more as a result
of having infrastructural facilities in industrial parks.

The head of the government said the SME Foundation has been providing
loans without mortgage and single digit interest rates to certain SME
entrepreneurial groups, clusters and entrepreneurs in various sub-sectors
involved in the manufacturing products under the “Credit Wholesale Program”
since 2009.

Mentioning that the loan collection rate of the foundation under the
scheme is about hundred percent, she said considering it very successful,
they would like to make arrangements so the SME Foundation can provide more
loans under the program.

In order to offset the losses caused by Covid-19, Sheikh Hasina said the
government has provided Taka 20,000 crore in first phase to give current
capital loan/investment facilities to SME entrepreneurs.

And in second phase, the government also announced a Taka 1,500 crore
stimulus package for the development of marginal rural people, she said.

In this connection, she said the government is providing 5 percent
interest subsidy against the interest/profit rate of 9 percent that means the
interest rate at the consumer level is only 4 percent.

She went on saying that they have also allocated Taka 300 crore to SME
Foundation and it has successfully disbursed Taka 100 crore in two months of
last fiscal where women entrepreneurs get loan 26 percent.

She hoped that the SME Foundation will also successfully distribute the
remaining Taka 200 crore allocated in the current financial year.

Regarding the National SME fair, the prime minister said this fair will
increase awareness about the products among the cottage, small and medium
industrialists remained in different parts of the country.

“It will play a positive role in the creation of domestic and
international markets alongside creating many new entrepreneurs in the SME
industry. Such developmental activities need to be intensified in the
future,” she opined.

Sheikh Hasina also briefly highlighted the measures taken by Father of the
Nation Bangabandhu Sheikh Mujibur Rahman for the development of cottage,
small and medium industrialists.