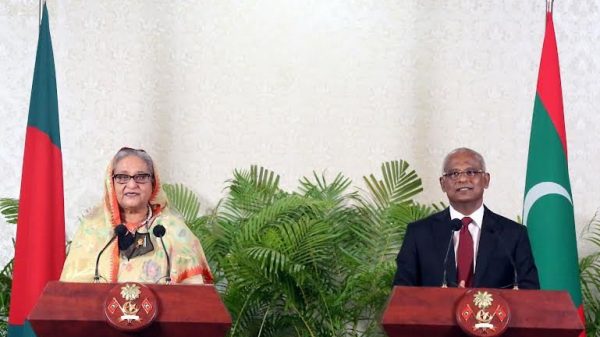 “I had a detailed discussion with President Solih on promoting bilateral trade, investment, and connectivity,” she said in a press statement joining a joint briefing with Maldivian president after witnessing the signing of three bilateral instruments and handing over 13 military vehicles to the Maldives government following a bilateral dialogue at the President’s Office here.

The Prime Minister said during the dialogue they agreed to strengthen bilateral cooperation, especially in health, education, human resources development, youth and sports, fisheries, and agriculture between the two countries and work together to face the challenge of climate change and the early repatriation of forcibly displaced Rohingyas to Myanmar.

Sheikh Hasina said during the bilateral talks with President Solih she had also re-emphasized the necessity of a Preferential Trade Agreement (PTA) between the two countries and a bilateral investment protection arrangement for mutual facilitation of investment, adding, “Despite opportunities, we could not yet fully tap the potentials of bilateral trade and investment.

About the outcome of the talks, she said, “I am happy to share that we just held a very fruitful discussion on the entire spectrum of our bilateral relations. We reviewed the progress made so far on our earlier decisions and found the outcome satisfactory.”

She said that they also discussed cooperation in multilateral fora including countering terrorism.

The Prime Minister expected a positive role of the media of the countries to further boost up bilateral relations.

Sheikh Hasina said that they look forward to partnering with the Maldives in the areas of commonalities for the benefit of the two peoples as Bangladesh looks ahead to transforming itself into a modern, prosperous and developed economy by 2041, fulfilling the dream of Father of the Nation Bangabandhu Sheikh Mujibur Rahman for a “Golden Bangladesh”.

The Prime Minister offered to supply many quality products to the Maldives at competitive prices as the manufacturing capacity of Bangladesh is growing.

She said that it is a matter of great satisfaction that Bangladesh accepted the Maldives’ proposal for recruiting health professionals from Bangladesh and at the same time Bangladesh will create opportunities for specialized post-graduation medical courses for Maldivian students.

The Prime Minister said that the direct air connectivity between Bangladesh and Maldives has been enhanced through the commencement of flights by Bangladeshi airlines US-Bangla.

“Our national carrier Biman Bangladesh Airlines, is also thinking of introducing flights in the Dhaka-Male sector. We hope that with direct flights people to people contacts and exchange of tourism cooperation will be increased. We also reviewed the possibility of establishing a direct shipping line,” she added.

As the welfare of country’s people is one of her government’s priorities, she said, the consular and community issues were featured prominently in the discussions.

The Prime Minister said that they also held discussions on regularization of undocumented Bangladeshi nationals who make substantial contributions to both economies.

She said the Bangladesh government has decided to facilitate visas on arrival for Maldivian nationals in the context of the improved situation of the current coronavirus pandemic.

Noting that it is her first ever bilateral visit to Maldives though she had come here earlier for the SAARC Summit, the Prime Minister said that 2021 is a landmark year for Bangladesh-Maldives bilateral relations.

The Prime Minister also recalled with gratitude President Solih’s attendance in the celebration of two mega events marking the Birth Centenary of Father of the Nation Bangabandhu Sheikh Mujibur Rahman and the Golden Jubilee of Bangladesh’s independence in March this year.