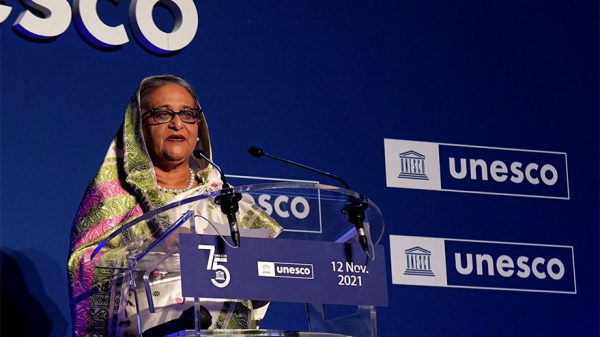 Addressing a function at the UNESCO headquarters here on the occasion of 75th founding anniversary of the UN body, the Bangladesh premier said her government has been disseminating the message of peace through instilling tolerance and respect.

“To do this, we have chosen education, science, culture and communications as effective tools,” she added.

Sheikh Hasina said the 75th anniversary is a unique moment “to celebrate our achievements” and it is also an important occasion to introspect and revisit the organization’s activities for the next 25 years leading to its centenary.

“Bangladesh’s commitment to the principles of UNESCO is reflected by our early membership in 1972,” she added.

“We consider this organization as one of the most effective platforms for promoting global peace and collective prosperity,” said the premier.

Guided by the peace-centric foreign policy of Bangabandhu Sheikh Mujibur Rahman, Bangladesh always remains at the forefront of global peace initiatives, she said, adding, “Our participation in UN peacekeeping as the top contributor is one such case.”

She said that her government is distributing 400 million free textbooks among around 42 million students at the beginning of school years.

“Our Digital Bangladesh vision has been preparing, through ICT based learning, our future generations for the 4th Industrial Revolution,” she added.

“We have launched ICT in our Education Master Plan under which about 83,000 schools were provided ICT devices, and 3,26,936 teachers trained,” she continued.

The premier has greeted the UNESCO Director-General for inviting her to this historic 75th Anniversary of UNESCO event.

“In these years, UNESCO has become a symbol of hope and peace for the world,” she opined.

This commemoration is significant for Bangladesh as it coincides with the Golden Jubilee Celebrations of the country’s independence and the birth centenary of its Father of the Nation, Bangabandhu Sheikh Mujibur Rahman, she said.

Sheikh Hasina said her father Bangabandhu Sheikh Mujibur Rahman was a champion of peace and a firm believer of humanity.

“His (Bangabandhu’s) deep “faith in the indomitable spirit of man-in the capacity of the people to achieve the impossible and to overcome insurmountable odds” resonates the very spirit of the UNESCO,” she said.

Sheikh Hasina also said that she is grateful that UNESCO declared the historic 7th March Speech of the Father of Nation in the Memory of the World International register as a documentary heritage.

“I thank UNESCO for paying such rich tribute to this people’s leader,” she added.

Mentioning that the pandemic menace “has taken lives, and changed our life”, Sheikh Hasina said it has also taught us to survive through innovative acts and speed.

The Prime Minister put forth four suggestions before the world as it is now moving on way to recovery from the pandemic.

Placing the suggestions, she said: “Let us seize the moment to forge strong partnership for the common good of our global humanity.”

In her first suggestion, the Prime Minister said that the pandemic has severely disrupted the education system.

“For recovery, we need a global plan to prioritise learning by investing in digital tools and services, access to internet, digital contents, and capacity building of teachers,” she added.

Secondly, she said, public-private partnership must be forged for creating a technology-assisted meaningful learning environment.

The premier thirdly suggested that the COVID-19 vaccine must be considered a global public good, saying, “We must ensure its access to all, especially to students and educators worldwide.”

In the fourth and last suggestion, she said, “We must harness the benefit of science and scientific researches for the welfare of our peoples, with technology transfer at the core.”