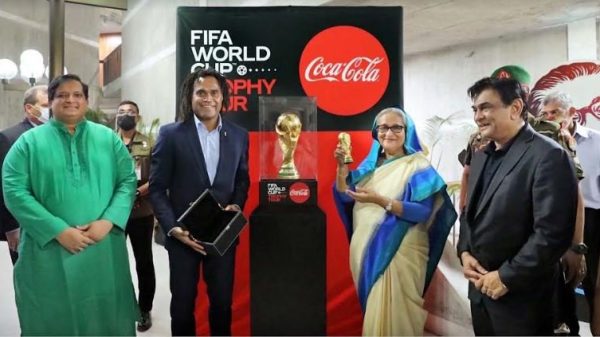 “I hope the country’s young generation would be inspired seeing the FIFA World Cup,” she said.

The Premier made this optimism while a delegation called on her on the occasion of receiving ceremony of FIFA World Cup original trophy at the lobby of Jatiya Sangsad Bhaban here this evening, said a press release of the Prime Minister’s Press Wing.

The seven-member FIFA delegation, studded with French 1998 World Cup winning booter Christian Karembeu, accompanied by the FIFA World Cup trophy which arrived in Dhaka earlier in the day on a 36-hour tour of Bangladesh.

A chartered flight brought the glittering trophy at Hazrat Shahjalal International Airport in Dhaka from Pakistan at 11:20 am.

Sheikh Hasina said football is the most popular sport in Bangladesh and that’s why they are working tirelessly to get the country’s children involved in this sport. 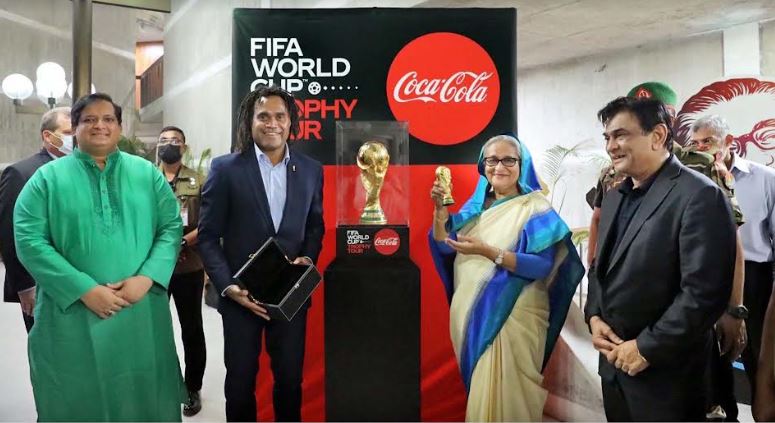 She reminisced about her family members’ involvement in sports, especially football.

She mentioned that her grandfather, father and the greatest Bangali of all time Bangabandhu Sheikh Mujibur Rahman, brothers, children and even grandchildren were very sporty and athletic.

The Prime Minister also exchanged greetings with the members of the delegation and expressed her gratitude to FIFA, Coca-Cola and Bangladesh Football Federation (BFF) for bringing the original World Cup trophy to Bangladesh for the first time.

At the end, FIFA and Coca-Cola presented gifts to the Prime Minister.