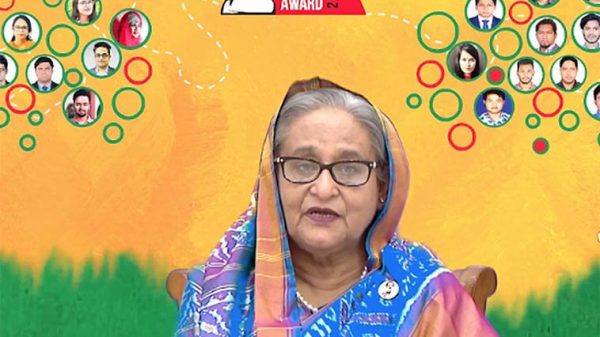 Prime Minister Sheikh Hasina today expressed her optimism that the initiatives of today’s youth would turn Bangladesh into a developed and prosperous country.

“Our younger generation is our key driving force. Today’s youths will prepare themselves for the days to come as they can take ahead the country. And this trend will continue generation after generation,” she said.

She added: “One thing we should bear in mind that strength, initiative and indomitable spirit of youths worked behind attaining our independence.”

The premier said this in a video speech played at the Joy Bangla Youth Award giving ceremony at Sheikh Hasina National Institute for Youth Development at Savar.

Sheikh Hasina hoped that today’s youth would translate Bangabandhu’s dream into reality by building a Sonar Bangla and they would reach the nation a dignified position in the world.

“We want to build Bangladesh for the coming days by utilizing the merits and knowledge of youths. Bangladesh’s achievement in the last 12 years didn’t happen suddenly. It has been possible due to our government’s policy and programme,” Sheikh Hasina said.

Appreciating the initiatives of the youths, the prime minister also hoped these initiatives would play a vital role in bringing positive changes in society and turning Bangladesh into a developed and prosperous nation by 2041.

Mentioning that her party Awami League dedicated their election manifesto to the young generation, Sheikh Hasina said, “I will always stay beside you the youths to recognize your contributions”.

Father of the Nation Bangabandhu Sheikh Mujibur Raman started his struggle for establishing the rights of repressed and downtrodden people from his youth, she said.

She said Bangabandhu had given highest importance to youth while he was rebuilding the war-ravaged Bangladesh after the independence. She urged the youth to prepare themselves to keep pace with the advanced technology to cope with the ever-changing world.