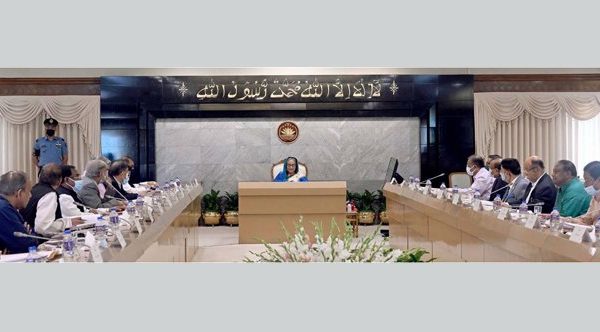 Prime Minister Sheikh Hasina today at the Cabinet meeting directed the authorities concerned to go for more alternative sourcing of food grains collection as precautionary measures although the country is already in a comfortable position in terms of food grains stock.

“Instead of depending the specific countries from where we are collecting the food grains, initiative should be taken to source one or two more places as precautionary measures so we don’t face any challenge if any source fails to supply it,” the Premier was quoted as saying.

The Cabinet Secretary said that at present there is sufficient stock of food grains (rice and wheat) in the country, but agreements have already been made with different countries to import the amount of rice that will go from the warehouses to the people for OMS and food support activities.

Even after this comfortable situation, he said, the Prime Minister has instructed the concerned to take the initiative to buy food grains from one or two alternative places to avoid any challenges which would possibly be appeared if any of the five countries designated for import are unable to provide food grains.

At present food grains are being bought from Russia, India, Myanmar, Vietnam and Thailand.

The Cabinet Secretary also said that there will be no problem if food is imported from Russia.

Mentioning that the food grain situation has been discussed at the cabinet meeting, Khandker Anwarul said currently there is more than 20 lakh metric tons of food grains in stock in the country.

In the last couple of days, he said, the price of rice has decreased by Taka 4-5 as pressure of people has reduced significantly due to Open Market Sale (OMS) and implementation of food friendly programs. “It is giving good results”, he added.


Mentioning that since the food friendly program has been decided to run for two months and later for another 3-4 months, the Cabinet Secretary said that 5 to 6 lakh metric tons of food grains will be required for it.


In this regard, an agreement has been made and orders have also been given to procure the amount of rice that will go from the warehouses, he said.

He said Bangladesh is in a good condition even though there is a threat of global food crisis from November and additionally Aman rice will also come in this time.


The Cabinet Secretary said that he had recently held a meeting with several Deputy Commissioners and they informed him that Aman’s irrigation work is going well due to uninterrupted power supply from midnight to dawn in village areas.

In the meeting, the Cabinet, in principle, approved the Bangladesh Institute of Management Act, 2022.

Regarding the bill, the Cabinet Secretary said as per the new act it would be turned into an autonomous body from the nature of full government office, which would focus on research and conduct different courses to offer diploma degrees.

The Institute would have a 15-member governing body to be led by the Industries Secretary as its chairman. Besides, the government would appoint a director general to run the institute.

The Cabinet also okayed “Agreement for Cooperation in Legal Field ”between Bangladesh and Qatar” aiming to exchange legal frameworks and cooperation of different bodies of the two countries.

Besides, ratification of the Protocols Amending Articles 50 (a) and 56 of the Convention on International Civil Aviation was also cleared by the Cabinet in its today’s meeting.