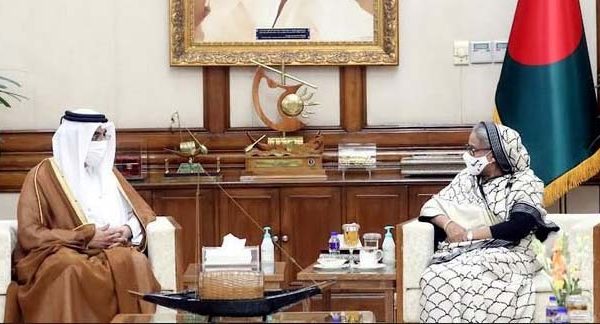 Prime Minister Sheikh Hasina today offered land to Qatar in the special economic zones being set up across Bangladesh alongside seeking
more help from the gulf country in the energy sector, particularly in LNG import.

“Bangladesh is setting up 100 special economic zones. Qatar can take land in the zones for its investors and entrepreneurs to make investments on a larger scale,” she
said.

The Prime Minister said these while Qatar’s Labour Minister Dr. Ali bin Saed bin Smaikh Al Marri paid a courtesy call on her at her Ganabhaban residence this
afternoon.

The Premier told the minister of Qatar that China, Japan, India and Korea have already taken land in the economic zones and they are working to set up industries there.

Sheikh Hasina has sought more cooperations from Qatar in LNG import and the
minister of Qatar expressed his country’s keenness to cooperate Bangladesh in
the energy and health sectors.

The Prime Minister has also expressed eagerness to import fertiliser from
Qatar.

She said Bangladesh attaches special priority to the relationship with Qatar
as a brotherly country.

On the Rohingya issue, Sheikh Hasina said around 1.1 million forcibly
displaced Rohingyas have taken shelter in Bangladesh since 2017, which has
now become a huge burden for Bangladesh.

The Premier has sought cooperation from Qatar over the issue, saying,
“Organisation of Islamic Conference (OIC) is extending support to Bangladesh
in this issue.”

Bangladesh has already shifted 30,000 Rohingyas from Cox’s Bazar to Bhashan
Char, she said.

Regarding the Covid-19 situation, she said that the Coronavirus is now under
control in Bangladesh.

“But, we are very cautious,” she added.


The Qatar Premier also invited Sheikh Hasina to attend the World Cup Football
competition as the event is going to start on November 20.

The minister said he had fruitful talks with Bangladesh’s minister of
expatriates’ welfare and overseas employment over manpower issue.