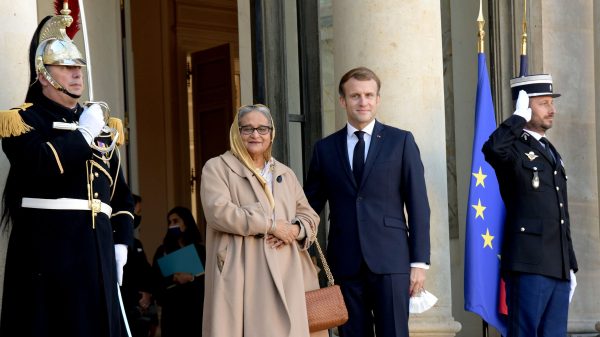 Bangladesh Ambassador to France Khandker Mohammad Talha and chief of local
administration received the premier at the airport.

Sheikh Hasina was accorded static guard of honour by 21 guards after walking through red carpet.

Later, Prime Minister Sheikh Hasina will be accorded a warm reception on her arrival at Elysee Palace, the official residence of French
President Emmanuel Macron.

The president of France is scheduled to receive the Bangladesh prime
minister at the palace.

A red carpet will be rolled out there to welcome Prime Minister Sheikh Hasina
while the Presidential Guard will also give salute to her.

Both Bangladesh premier and French president will have a tete-a-tete and
witness the signing of MoUs/TCA/TA.

Sheikh Hasina will also join a lunch hosted by Emmanuel Macron. She will
also inspect Guard of Honor to be accorded by Republican Guard at the Elysee
Palace.

Later, the prime minister is scheduled to reach the Matignon, the official
residence of French Prime Minister Jean Castex.

Upon her arrival at the Matignon, Jean Castex will receive the Bangladesh
premier and welcome her with flower bouquet.

Both the leaders will also attend a bilateral meeting where they will
discuss different issues.

Earlier on November 3, Prime Minister Sheikh Hasina reached London, the
capital of the United Kingdom (UK), from Glasgow after attending World
Leaders Summit at the COP26 and other events.

On October 31, she arrived in Glasgow on a two-week visit to the UK and
France.