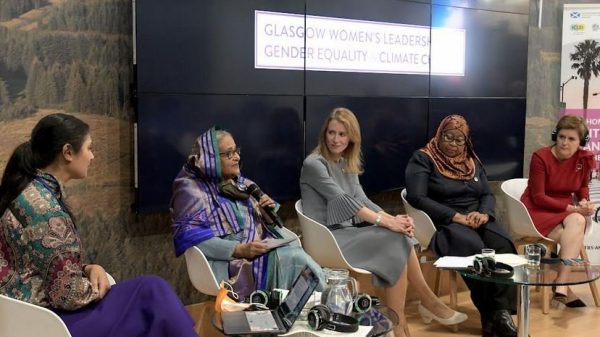 Prime Minister Sheikh Hasina today said being major sufferers of climate change women deserved an enhanced stake in the campaign against the phenomenon, requiring bolder steps for their empowerment particularly to develop resilience.

“It is important to create space for women in the decision making process to address their vulnerability due to climate change,” she told a high-level panel discussion on women and climate change, on the sidelines of the COP26 in Scotland of UK.

Sheikh Hasina said women were exposed to disproportionate impacts of climate change structural inequalities in human society along with inherent social customs and therefore “we believe recognising the vulnerabilities of women in climate change response is critical”.

Heads of state and government, ministers and experts joined the event called Women’s Climate Leadership Event– COP26 at Scottish Pavilion where the Bangladesh premier spelled out her government’s commitment to create space for women in the decision making process regarding climate change campaign.

Sheikh Hasina said most vulnerable and marginalized people around the world were greatest victims of climate change impacts for a number of socio-economic and cultural factors while “women and girls are major among them”.

She said it is a scientific fact that women are more resilient than men and even in most difficult cases of natural calamities, it is women who first turn around to take care of their families and households

But, she said, generally women across the world do not have equal access to resources and in many societies they are debarred from decision-making process and deprived of job payments.

Sheikh Hasina said all those factors contribute to more adverse impacts of climate change on women than on their male counterparts.

“I call upon all of you, especially the women leaders, for taking bold and decisive actions in this COP for a global compact to build communities resilient to climate change in a way where everyone – both man and woman – can participate equally,” Sheikh Hasina said.

She said Bangladesh was set to implement ‘Mujib Climate Prosperity Plan’, named after the country’s Father of the Nation Bangabandhu Sheikh Mujibur Rahman, mainstreaming women role “in the journey of climate vulnerability to climate resilience to climate prosperity”.

She also pointed out that Bangladesh already secured women’s leadership from the national parliament-level to the grassroots level decision-making processes while its National Adaptation Programme of Action (NAPA) incorporated the gender issue in a comprehensive manner as part of adaptation solutions.

The premier her government has introduced Gender Responsive Budgeting (GRB), allocating around 30 percent share of expenditure on women development to mainstream gender in all policy and decision-making processes.

The premier said women should be included in drivers’ roles in every level of initiatives starting from the planning to resource allocation and implementation.

“In this regard, financing gender responsive adaptation and mitigation measures will be the key,” she opined.

Sheikh Hasina urged all to “amplify the voices of women across the world to ensure equal access to finance to address the needs and priorities of women” on climate change issues.