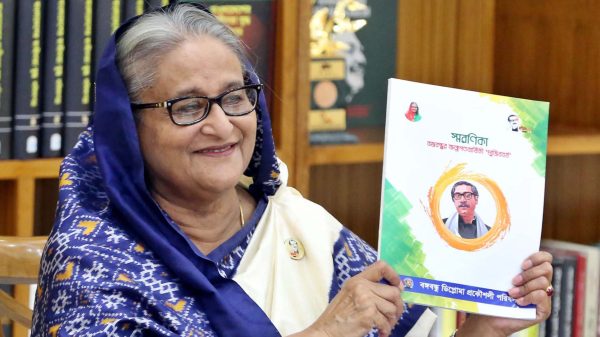 Prime Minister Sheikh Hasina today reiterated her call to the countrymen to put concentration on boosting food production, doing savings and showing austerity in all stages in the wake of global crisis.

“I am again urging all to be active in enhancing food production, so the people of Bangladesh don’t face any suffering during the world economic recession. We have to do our arrangement by our own,” she said.

The premier was addressing the opening ceremony of 24th National Convention and 43rd Council of the Institute of Diploma Engineers, Bangladesh (IDEB) at Osmani Memorial Auditorium as the chief guest, joining virtually from her official residence Ganabhaban here.

Sheikh Hasina also called upon the countrymen to maintain austerity as price of all essential items has shot up across the globe due to the Covid-19 pandemic and Russia-Ukraine war.

“We, all have to maintain austerity, have to do saving and have to avoid extra expenditure,” she said.

The people of the country will have to be very careful as global economic situation is worsening day by day, she added.

Referring to the situation in the USA, England and European countries, the premier said the developed countries are facing trouble in providing electricity, energy and fuel and so, they have restricted using of water, hot water and heating system.

Actually, they are scared that what they will do in the upcoming winter season, she added.

In this regard, she said, “There is no other way, except becoming cautious, doing saving and maintaining austerity. Apart from this, also boost production to be self-reliant in food.”

Sheikh Hasina said her government has illuminated all the houses in the country providing power connection as per its commitment, but in the wake of global scenario, they also have to take some measures to cut cost.

About the development projects, she told the engineers that the government will implement the projects quickly which are needed to complete fast in this situation.

“We have to move ahead in a planned way and if we do so, global economic recession can’t harm us,” she added.

At the outset of the function, one-minute silence was observed in respect to the late members of IDEB.

A documentary on the activities of the IDEB was also screened.

The premier unveiled a publication by IDEB on the occasion of the birth centenary of Father of the Nation Bangabandhu Sheikh Mujibur Rahman as well.

IDEB leaders also handed over a logo of Mujib Borsho to the prime minister. On behalf of the premier, the liberation war affairs minister received it.

The IDEB is a professional body of the country’s more than 5 lakh diploma engineers.

On behalf of the prime minister, the liberation war affairs minister handed over IDEB gold medal to three recipients selected from the IDEB members.

The Prime Minister put emphasis on taking preparation from right now to face the possible changes to be seen in the domestic and international labour markets in the wake of upcoming 4th industrial revolution (4IR).

“We’ve a huge labour force, which will have to be included in it (the process to face the changes). They will have to be trained, educated and developed as skilled manpower,” she said.

She said the government has taken the skills development programmes to face the challenges induced by the 4IR and to attain the Sustainable Development Goals (SDGs). “Because it is very essential to develop skilled manpower,” she added.

The Prime Minister noted “In this era of 4IR, the use of technology, artificial intelligence and robotics are important factors.”

Mentioning that 4IR will have a huge impact on our economy and employment, the head of government said the use of robots and technology with artificial intelligence has already started in the readymade garment sector in the country and will start in other sectors gradually.

She continued that as a result of the use of robots and technology with artificial intelligence, the productivity in the RMG sector is increasing and the quality of the clothes is improving simultaneously.

Putting emphasis on technical education, the premier said it is essential to bring a radical change in the country’s education system. “We’ve already brought changes here,” she said.

“We are implementing comprehensive programmes in science and technology, and technical education to turn manpower into human resources,” she said, referring to different steps and plans of the government.

In this regard, she said that they’ve already started the work of setting up 23 world class polytechnics and four international standard women’s polytechnics in the country.

With the decision for establishing a technical school and college in every upazila, she said, the government has completed the construction work of 100 institutions, while students have been admitted into 70 of them.

In the remaining 329 upazilas, projects worth Taka 20,500 crore have been started, she said, adding, “A total of 593 technical schools and colleges will introduce technical education from 6th to 12th grade.”

Apart from this, Sheikh Hasina said steps have been taken to make one technical subject with 100 marks compulsory for all students in every class from 6th to 8th grade in all secondary schools and Dakhil Madrasas.

The Prime Minister said that they have inaugurated 24 more Technical Training Centers (TTCs) with the existing 64 TTCs in the country to develop skilled human resources to meet the local needs and foreign countries.

Mentioning that the government has taken up the plan to set up 88 more TTCs, she said “All these technical training centers are imparting training to send skilled workers to different countries of the world including the Middle East.”