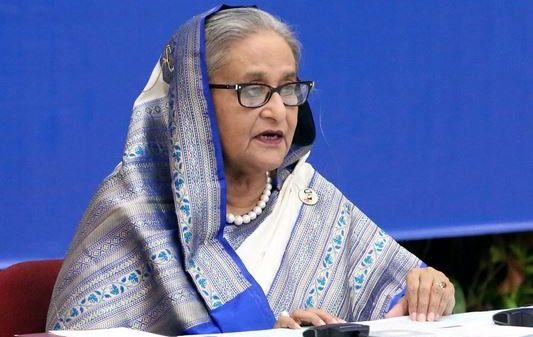 Prime Minister Sheikh Hasina today stressed
the need for building a peaceful world based on partnership urging all to use
their resources in ensuring universal sustainable development abandoning arms
races.

“At this critical juncture (during the Covid -19 period) in the world, I
urge the people to use their resources to achieve universal sustainable
development without spending resources on arms races. Let us go down in
action, committed to universal peace,” she said.

She was addressing the closing ceremony of the two-day “World Peace
Conference-2021″ in city joining virtually from her official Ganabhaban
residence here. A 16-point Dhaka declaration was adopted at the conference.

The conference started on Saturday at the Hotel Intercontinental in the
capital on the Birth Centenary of Father of the Nation Bangabandhu Sheikh
Mujibur Rahman and Golden Jubilee of the country’s independence.

Sheikh Hasina said that over the past two years, the coronavirus
pandemic has plunged the entire world into a new crisis.

“This crisis has proved that none of us are separate. There is no
alternative to building an accountable world order based on the partnership
to live peacefully in this world,” she said.

The prime minister said that Bangladesh is always ready to work with all
based on mutual respect and understanding to fully embrace the ideals of
peace of Father of the Nation Bangabandhu Sheikh Mujibur Rahman.

She continued: “We made the ultimate sacrifice for freedom, and through
it, we realized the value of peace and the deepest aspirations of the entire
human race. As always, we have unwavering support for the just demands of the
Palestinian people.”

Despite the limited resources, Sheikh Hasina said that Bangladesh has
provided temporary shelter to more than 1.1 million Rohingya forcibly
displaced from Myanmar adding, as a result, it has been possible to avoid a
major humanitarian catastrophe in the region.

“We are pursuing peaceful diplomacy to repatriate the Rohingya to their
homeland,” she said.

A video message from former prime minister of the UK James Gordon Brown
was also aired at the closing ceremony.

Representatives from 50 countries including Ban Ki-moon, former
Secretary-General of the UN; Jos, Ramos-Horta, former president of East
Timor, spoke at the inaugural ceremony of the conference, both virtually and
in person.

Earlier, the theme song of the World Peace Conference-2021 and an audio-
video presentation on the event was screened at the function.

She also said that Bangabandhu has proved that freedom from all shackles of
deprivation-inequality-exploitation eventually from dependency, and achieving
prosperity by ending hunger and poverty may construct this path.

The premier quoted Bangabandhu as saying the Father of the Nation also
called for upholding a policy of non-alignment and the establishment of
friendly relations through ending warfare and arms races to maintain world
peace.

She said that when Urdu was imposed as the state language on the people of
East Bengal after the creation of Pakistan in 1947, the then young student
leader Sheikh Mujib protested it.

Bangabandhu was repeatedly imprisoned for organizing movements to establish
Bengali as the state language and was released on February 27, 1952, after a
long confinement, Sheikh Hasina said.

In the same year, she said that Bangabandhu attended the Asia-Pacific
Peace Conference held in Beijing and became the first Bangalee to speak in
Bangla in a foreign land.

The prime minister said that on the first page of his book “Amar Dekha
Nayachin,” he (Bangabandhu) explained his participation in the communists’
peace conference.

“We are willing to join the peace conference of those who want peace in
the world today. We agree to raise thousands of voices with all those
fighting for peace, be it Russia, America, Britain, or China- we want peace,”
she quoted Bangabandhu as saying.

For a long period of 24 and a half years, Bangabandhu led the war of
independence, including all the democratic movements, to realize the just
rights of the people of East Bengal, the premier said.

She said that the Father of the Nation devoted himself to the struggle to
rebuild the newly independent country and make the people of this country
self-reliant.

Achieving rapid economic growth, he (Bangabandhu) proved that the people of
Bangladesh can change their own fate, but, unfortunately, he only got three
and a half years after independence, she said.

Sheikh Hasina said that the assassins of August 15, 1975, did not stop by
killing the father of the Nation, they introduced a culture of impunity in
this country, promulgating indemnity.

The prime minister added that in just nine months after independence,
Bangabandhu crafted a constitution.

Article 25 of that constitution attached friendship to the heart of our
foreign policy in the field of “promotion of international peace, security,
and solidarity,” she continued.

In international relations, mutual respect, non-interference in internal
affairs, international law, and the UN Charter were adopted as the basis of
foreign policy, she said.

At the same time, the premier said that Bangabandhu supported the just
struggle of the oppressed people worldwide against the use of force, complete
disarmament, determination of their respective socio-economic systems, and
against imperialism, colonialism, or racism.

She went on saying that the Father of the Nation was nominated for the
Julio Curie Medal in a declaration in Helsinki, Finland, on October 10, 1972,
for his outstanding contribution to world peace by establishing the rights of
the oppressed people in the country.

The prime minister added while receiving the award in Dhaka on May 23,
1973, Bangabandhu said in his speech, “I had the honor of attending the first
Asian and Pacific Peace Conference in Peking in 1952 and the World Peace
Council Conference in Stockholm in 1956.”

“Bangabandhu said let me mention here that world peace has been one of the
fundamental principles of my philosophy of life. I have always been with the
oppressed, the exploited, the peace-loving and freedom-loving people in any
part of the world. We want peace to reign in every part of the globe. We want
it to consolidate,” Sheikh Hasina said.

She added that the Father of the Nation enacted the Territorial Waters and
Maritime Zones Act in 1974 to ensure Bangladesh’s maritime boundaries and the
peaceful use of its resources.

The premier said while addressing the Commonwealth Summit in Kingston,
Jamaica on May 5, 1975, Bangabandhu added, “We also continue to support the
concept of neutralization of South East Asia and the declaration of the
Indian Ocean as a zone of peace”.

Bangabandhu said in that summit, “We believe more concerted efforts are
called for on the part of the littoral states in pursuit of these objectives
in face of the regrettable tendency to develop military bases and accentuate
the power privileges in this region,” the premier mentioned.

After 21 long years of struggle and self-sacrifice, Sheikh Hasina said that
they were elected by the people in 1996 and formed the government.

On November 12 of the same year, the premier said her government repealed
the Indemnity Ordinance to eradicate the culture of impunity by establishing
the rule of law in the country.

“So we started trial of the murder of the Father of the Nation. On
December 2, 1997, we signed a peace treaty ending the bloody conflict with
the hill tribes of the Chittagong Hill Tracts,” she said.

“In 1997, we first proposed a resolution on the declaration and program of
action of a ‘culture of peace’ at the United Nations, which was adopted on
September 13, 1999,” she said.

She added that accordingly, the United Nations declared 2000 as the
‘International Year of the Culture of Peace’ and 2001-2010 as the ‘Culture of
Peace and the Decade of Nonviolence.’

After winning the election in 2008, the prime minister said that they
executed the verdict of the killers of the Father of the Nation and started
the trial of war criminals by establishing the International Crimes Tribunal.

“With our neighboring countries India and Myanmar, we resolved maritime
disputes through the International Court of Justice,” she said.

Bangladesh is proud to be the highest peacekeeper sending country to the
United Nations, the premier said.

“We have also adopted a zero-tolerance policy against terrorism and
violent extremism. We are working closely with the concerned agencies or
organizations to maintain a regional and international peaceful environment,”
she said.

The prime minister said that Bangladesh is now a role model in the world in
socio-economic development.

“We have received the ‘SDG Progress Award.’ We have revolutionized
electricity, communications, information technology, and agriculture. We have
established the economy of the country on a solid foundation and given 187
thousand 679 crore taka as COVID-19 allowance,” she said.

“We have emerged from a least developed country to a developing country,”
she added.

In coordination with SDG-2030 to implement Vision-2041, she said her
government has adopted the Second Perspective Plan for 20 years.

“With that goal in mind, we have started the implementation of the 8th
Five Year Plan. We are implementing ‘Bangladesh Delta Plan 2100’,” she said.

Mentioning that Bangladesh is moving forward at an irresistible pace, she
said, “We are committed to building the self-esteemed, developed, and
prosperous ‘Golden Bangladesh’ of the Father of the Nation’s dream for the
next generation”.