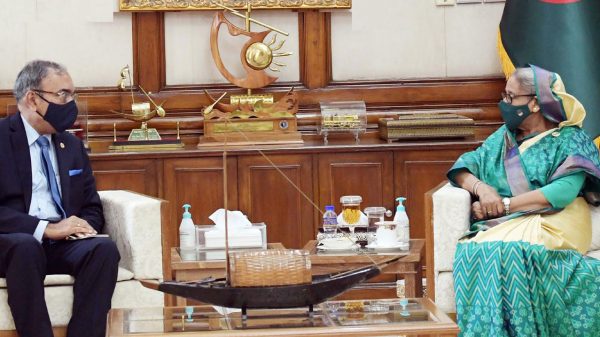 Prime Minister Sheikh Hasina today laid emphasis on working together to eliminate poverty from the South Asian countries as poverty is the common enemy in the region.

“The main enemy in the South Asian countries is poverty. So, all will have to work together for poverty alleviation,” she said.

The premier made this remark while Secretary General of South Asian Association for Regional Cooperation (SAARC) Esala Ruwan Weerakun with his wife paid a courtesy call on her at the latter’s official residence Ganabhaban here.

The prime minister said, “We, the countries in this region, should cooperate with each other. Many problems can be solved bilaterally.”

She said when Father of the Nation Bangabandhu Sheikh Mujibur Rahman had visited Kolkata after the Liberation War, he in his speech floated the idea of regional cooperation there.

The SAARC secretary general stressed the need for strengthening the SAARC food bank.

He highly praised Bangladesh for its contribution to SAARC Agriculture Centre.

Esala Weerakun, who hailed from Sri Lanka, said the pandemic is also responsible for the ongoing economic crisis in his country and appreciated the support Bangladesh has extended towards Sri Lanka.

Sri Lanka now needs fertilizer as the rice production dropped by 50 percent there, he added.

In this context, the prime minister said Bangladesh, despite being a country of huge population, may provide potato to Sri Lanka during this crisis.

She said Bangladesh has taken steps to grow more foods amid the global food problem following the Covid-19 pandemic and Ukraine-Russia war.