PM urges all to be vocal again anti-country propaganda 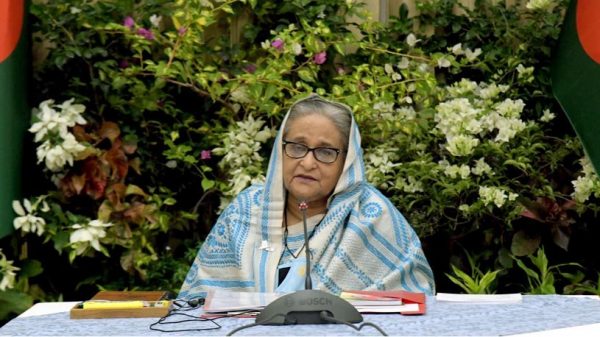 PM urges all to be vocal again anti-country propaganda

Prime Minister and Awami League (AL) President Sheikh Hasina today urged all to be aware against a group of people who are spreading propaganda at home and abroad even after so much development in the country.

“Even after so much development, some people are spreading propaganda staying abroad and inside the country. (You) have to be aware of them, and respond to the propaganda,” she said.

She made these remarks while chairing the AL Central Working Committee (ALCWC) meeting at her official residence Ganabhaban here.

Mentioning that some people are holding meetings on how to pull down the Awami League from power, Sheikh Hasina said “The strength of people is the strength of Awami League, and we are working in the service of the people.”

She said Bangladesh has now reached a dignified position in the world. “We are working for the welfare of the people. The touch of development has reached the villages. People of all walks of life have got the taste of development,” she added.

She questioned why the people would vote for BNP as a fugitive accused is running the party. They have looted the money of the poor of the country and siphoned it abroad, she said, adding: “What is the source of income behind their luxurious and comfortable life abroad?”

The Awami League President said there are some people who don’t see those as criminals even after committing thousands of crimes.

“Although they (people) frequently speak against corruption, they finally take position in favor of those persons convicted for corruption,” she said, adding, “They are also shedding crocodile tears for those convicted persons who have sent abroad thousands of crore of Taka embezzling the money of orphans.”

Mentioning that she is the everlasting target of Begum Khaleda Zia, the Prime Minister said, “Khaleda Zia had declared that I will never be the Prime Minister, even the Leader of the Opposition. I will not be able to come to power even in a hundred years. . . The grenade attack came after these announcements.”