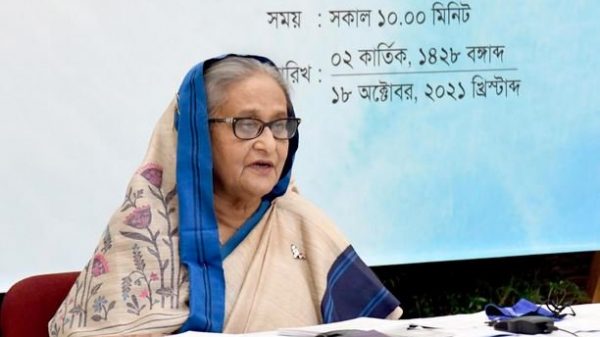 the nation to remain alert against 1975 like killings, coups and conspiracies
that could hinder the country’s prosperity.

“I urge the nation to be alert against killings (like 1975), coups and
conspiracies in Bangladesh that can impede country’s progress and also
against assignation of children,” she said.

The prime minister said this while formally opened the “Sheikh Russel Day”
and distributed “Sheikh Russel Gold Medal” among the winners on the 58th
birthday of Sheikh Russel, the youngest son of Father of the Nation
Bangabandhu Sheikh Mujibur Rahman, through video conferencing from her
official Ganabhaban residence here.

The prime minister mentioned that the Father of the Nation had enacted a
law in 1974 to ensure security for the children, saying, “How much
unfortunate it was that his children had to die by the hand of killers.”

Sheikh Hasina, the eldest sister of Sheikh Russel, said with an emotion
charged voice that the killers brutally assassinated Russel on August 15 in
1975 after killing his father, mother, brothers, and uncle (chacha) as he
wanted to go to his mother.

She questioned: “Why was the baby killed? What was his guilt? What was the
guilt of others? Was it a crime to liberate the country?”

The premier said that her government has been trying to ensure that no such
incidents would take place in the future.

Describing the children as “future of the coming days” she said, “I want
everyone to perform their duties accordingly to give the children security,
love and a beautiful and meaningful life.”

Sheikh Hasina called upon the children to pay attention in study as
nothing is as worthy as education.

“I just want to say to the children that do your study with attention
because education is the most valuable asset which will never be lost, stolen
or snatched away,” she said.

The prime minister urged the guardians to encourage their children to study
and take part in sports, cultural programmes and other extracurricular
activities.

She said that the schools, colleges and universities across the country
are gradually reopening after a long hiatus due to the Covid-19, urging all
concerned to maintain health protocols to remain protected from the deadly
virus.

Greeting the winners of various competitions, she said that giving a
reward is a recognition which creates fresh spirit among the winners to do
better in the future and create love and dutifulness towards the country.

The awards include a medal weighing one tola of gold, a laptop and a
certificate while prizes were also distributed among the winners of on-line
quiz competition.

Besides, laptops are being distributed among 4000 freelancers out of 40,000
participants under the Learning and earning Development Projects (LEDPP) for
their outstanding performance.

The prime minister also distributed prizes among the winners of the sports
and cultural competitions across the country arranged by Sheikh Russel Jatiya
Shishu-Kishore Parishad.

She also handed over prizes among the winners of roller skating
competitions organised by Roller Skating Federation.

An Audio-visual presentation on the life of Sheikh Russel was screened and
the theme song of the “Sheikh Russel Day” was also played at the function.

The nation, for the first time, is observing the day in a befitting manner,
as the government had earlier announced October 18, the birthday of Sheikh
Russel, as “Sheikh Russel Day” under the category “Ka”.

The day is also being observed at Bangladesh missions abroad while
different dailies published special supplements today highlighting the
significance of the Day.

A doa was also held at the function, seeking eternal peace of the departed
souls of Sheikh Russel and other martyrs of August 15 in 1975.

Sheikh Russel, the youngest son of Father of the Nation Bangabandhu Sheikh
Mujibur Rahman and also the youngest brother of Prime Minister Sheikh Hasina,
was born on October 18 in 1964 at the historic Bangabandhu Bhaban at
Dhanmondi 32 no road in the city.

He was brutally assassinated along with most of his family members,
including his father Bangabandhu Sheikh Mujibur Rahman, on August 15, 1975
when he was a student of class four at the University Laboratory.

To mark the day, government bodies, ruling Awami League and its associate
bodies, and different socio-cultural organizations have taken various
programmes to observe the day at national and international level.