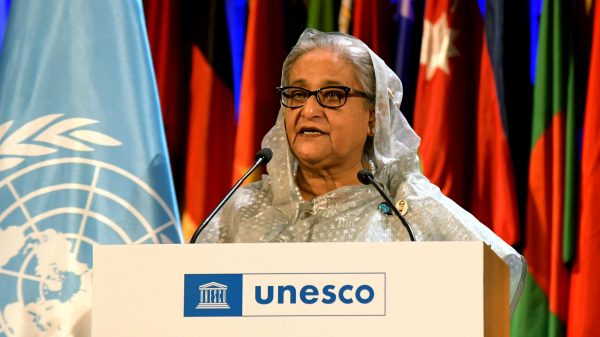 Prime Minister Sheikh Hasina today urged the UNESCO to declare remote learning and online education as a global public good as online education evolved as a “new normal” during the Covid-19 pandemic.

“. . . during the Pandemic, lack of resources and technologies has jeopardized our decades of gains in school enrolment literacy rate and learning of youth and adult. I call upon this august body (UNESCO) to declare remote learning and online education as a global public good,” she said.

The premier made this call while addressing the 41st General Conference of UNESCO here.

She also called upon UNESCO to work as a matter of priority with governments, private sectors and other stakeholders to rally partnership and resources to make this happen.

Mentioning that the pandemic has undermined the hard-earned achievements, she said, “It has revealed a major fault line in our education system.”

According to UNESCO, close to half of world’s students are affected by partial or full school closures. “Online education evolved as a “new normal” during the pandemic,” she said, adding, “Yet, it also exposed a new divide.”

Sheikh Hasina, however, said digitization has enhanced better services and free flow of information, but there are worries over misuse of digital tools and platforms for spreading harmful contents and hate speech.

“World bodies like UNESCO should work for addressing this issue,” she said, mentioning that this has significant negative impact on the peace and stability of the society.

Talking about climate change issue, the Prime Minister said this is a life-threatening reality not only for Bangladesh, but also for many other countries of the world.

“As a leading voice for climate vulnerable countries, we have embarked on ambitious climate commitments. We have cancelled 10 coal-based power plants worth USD 12 billion of foreign investments and we hope countries that are much more responsible for global warming will fulfill their commitments to address climate change impacts,” she continued.

“Faster pace of global warming has affected our ocean environment. This calls for urgent scientific research and knowledge,” she said.

Sheikh Hasina said as a coastal and a frontline country within the UNESCO Intergovernmental Oceanographic Commission (IOC), Bangladesh has initiated measures for a nature-based solution. “We would like to see a stronger presence of the IOC in our region,” she added.

The premier said the success of UNESCO largely depends on its impact in improving lives of the peoples.

“As we are passing through a difficult time, the need for a strong, dynamic, innovative multilateral organization is felt more than ever before. Bangladesh is ready to work closely with UNESCO in its endeavour to ‘construct the defences of peace”, she said.

She also mentioned UNESCO as a true friend of Bangladesh, saying that ‘Martyrs Day’, the 21st February, marking the great sacrifice for establishing Bangla as the state language, was recognized as the International Mother Language Day.

“We are also grateful for inscribing the historic 7th March speech of the Father of our Nation Bangabandhu Sheikh Mujib in UNESCO’s Memory of the World Register,” she said.

“Globally, we promote the concept of culture of peace- a concept which anchors on the values of tolerance, respect and compassion,” she said.

Sheikh Hasina said education is a basic human right and it is the most important foundation for the development of human society.

“Likewise, we have modernized faith-based education by addressing practical need for future work-world. We are providing mother language-based education for the citizens of ethnic groups,” she said.

She highlighted that around 83,000 schools in the country have been provided with ICT devices. About 327, 000 teachers have been given training.

“Teachers have been vaccinated on a priority basis. As we have opened our schools with improvement in COVID situation, we are vaccinating students from age 12 on priority basis,” she said.