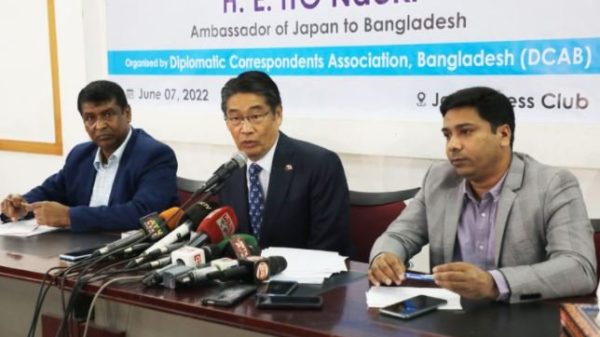 Japanese Ambassador to Bangladesh Ito Naoki today  said the current Bangladesh government’s consistence and coherent policies,  in more than a decade, has played an important role in making the Japanese
investment doubled and trade triple in the country.

“Policy cohesion, policy consistency played a very important role and it will play as more in the future,” he said.

Responding to a question on whether the Bangladesh’s political stability would help to flourish its recent economic growth, he said Japan-Bangladesh bilateral economic partnership has witness highest growth in the last decade
out of the five decades since the country’s independence while policy consistency played a vital role.

“I’m rather optimistic that next one decade, we will have even better economic partnership between Japan and Bangladesh,” Naoki added.

In last 10 years, the Ambassador said, number of Japanese companies in Bangladesh became tripled while 68 percent of them are planning to increase their business here.

Ito Naoki said Tokyo and Dhaka is looking forward to make a bilateral economic partnership deal as like free trade agreement to further flourish the trade relations between the two countries.

The envoy, however, said Bangladesh needs more foreign direct investment (FDI) to meet the challenges of graduating from Least Development Counties (LDCs) group to the middle income one by 2026.

The Japanese Ambassador said Tokyo is also interested to sell defence equipment to Bangladesh as Dhaka has currently considered to diversify its defence procurement sources.

Naoki also said that Japanese companies are more interested than ever to invest in Bangladesh as the government here has more coherent policies that draw foreign investments and its economy is growing continuously.

He said Rohingya crisis should not be allowed to become a destabilising factor for the region.

“We need to have more coordinated approach to address the problem,” he said,
adding that his country has been engaged to explore all possible way to improve conditions in Rakhine state so that the Rohingyas can return.

Replying a question regarding Bangladesh next general election, the Japanese envoy said his country expects a free and fair election will be held here without any violence.

“I hope, between now and next year, the government will take all measures to make sure that the elections are free and fair and better than that of the previous election of 2018,” he said.

Regarding the recently formed Indo Pacific Economic Framework (IPEF) launched by the United States in Tokyo, the envoy welcomed the Washington’s initiatives and hoped that Bangladesh would “realized some economic merit in this framework (to join)”.