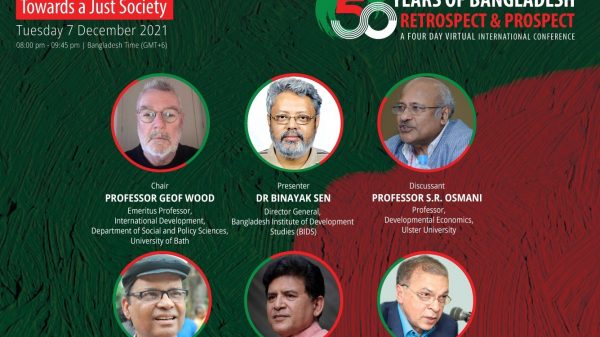 The session titled, “Panel 4: Towards A Just Society” of the Virtual International Conference on Fifty Years of Bangladesh: Retrospect and Prospect, held on 7 December 2021.

The session was chaired by Professor Wahiduddin Mahmud, Chairman, Economic Research Group (ERG). Three presentations were made at the session and three discussants commented on the paper, reads a release of CPD.

Dr Binayak Sen, Director General, Bangladesh Institute of Development Studies (BIDS) presented a paper which provided new evidence on the poverty dynamics in Bangladesh in the 2010s using the three rounds of a large-scale rural representative panel data of Bangladesh Integrated Household Survey (BIHS) survey of 5,024 households generated by International Food Policy Research Institute (IFPRI). The evidence suggests considerable progress in poverty reduction in the 2010s. The poverty rate dropped from 34 per cent in 2012 to 29 per cent in 2015, and dropped further to 22 per cent in 2019.

The paper unpacks the relative magnitudes as well as the drivers of five major migrations in and out of rural poverty against the backdrop of shifting poverty patterns over the previous 25 years. These patterns pertain to: i) continuous ascent out of poverty (movers); ii) constant descent into poverty (fallers; iii) chronic poverty (chronic poor); iv) occasional slippage into poverty and occasional escape from poverty (churners); v) those who manage to stay permanently above poverty (never poor). Each poverty group is discovered to have unique characteristics and anti-poverty policy consequences. Evidence suggests that there is a lot of churning in and out of poverty, as well as a requirement for resilient graduation out of poverty.

The education level of the workers among the ‘movers’ has always been higher than those of ‘fallers’ and ‘chronic poor’. The average education of the workers in the never poor group was consistently higher than in case of other poverty groups. In contrast, the average education level was consistently lower for chronic poor compared to all other groups. The ‘movers’ had better initial land ownership than the chronic poor. Although the paper states that non-land asset held by the fallers initially was higher than that of the movers, the fallers underperformed in utilizing such resources effectively.

The movers had greater access to microcredit compared to the fallers. The loans taken from the non-institutional sources remained considerably higher among the permanent fallers than the rural average. In terms of investing of loans in income-generating activities the movers have outperformed the fallers. There was inequality also in terms of the shocks experienced by each group of poor. The permanent fallers were found to have experienced significantly more health shocks than the rural average. While trying to cope with the shocks, each group resorted to borrowing. A significantly high percentage of permanent fallers have taken loans from non-institutional sources.

The paper elaborated the different factors associated with the ascent and descent of poverty. The overall story suggests that permanent movers had better human capital, physical asset accumulation, occupational diversification and better transfer payments than other groups. The author argues that we need a better understanding of the shock dynamics and their interplay with poverty dynamics in order to explore the different routes available for poverty reduction, mentioned Professor S.R. Osmani, Professor, Developmental Economics, Ulster University was the discussant of the paper.

The presentation by Professor M.M. Akash, Professor & Chairman, Department of Economics, Dhaka University showed how Bangladesh has achieved surprising success in various socioeconomic indicators such as quantitative expansion of education facilities for children, low infant mortality rate, relatively high average life expectancy, and decreasing incidence of poverty. However, only studying human development and focusing just on aggregate levels is insufficient, as the aggregate frequently obscures differences in both human development successes and human deprivations. As a result, focusing just on averages may produce a false image. To acquire a genuine picture of human development in a society, it is necessary to go beyond the average and disaggregate the human development statistics. As a result, examining inequities in human growth is crucial.

Bangladesh’s independence war was primarily directed on two types of inequalities: regional inequalities and class inequalities. Such inequalities still prevail in the country, and it is growing at a fast rate. This is known as ‘crony capitalism” where cronies flock together and use state power to serve each other. Inequity and inequality are perpetuated in all spheres of development due to the structural dynamics of such a nexus of economic, political, and state power. The uneven power system created by inequity and inequality generates the so-called “inequality trap” for both developing and middle-income countries. Following the course, the current economic process in Bangladesh allows for more or less absolute development of all classes in general, but at a very uneven rate. Therefore, relative inequality continues to expand, and it is now widely acknowledged as unsustainable in the long run.

As a result, the most pressing problem confronting Bangladesh now is to build a more inclusive society by achieving Sustainable Development Goal (SDG) 10 which is arguably best expressed in the following epigram: “reducing inequality inside the country and across countries”. If economic growth is more evenly distributed, the same quantity of growth can alleviate poverty more quickly. As a result, there are only a few unusual circumstances when a well-coordinated approach for making growth more inclusive may achieve both faster growth and reduced inequality. History also reveals that in the early stages of their growth, post-revolutionary countries were able to fulfill the dual goals of growth and equity by making significant structural changes in the ownership of means of production, as well as inventive local institutional reforms.

The development literature discusses three basic methods for promoting more equitable economic growth and human development. These are the neoliberal development strategy, the mixed economy strategy, and innovative national strategy. The current government appears to be following the so-called mixed economy strategy inconsistently. Although the government acknowledges that certain very radical measures are the best strategy to address the problem of inequality, they have yet to be adopted or executed. Professor S.R. Osmani, Professor, Developmental Economics, Ulster University shared his comments as the discussants of this paper.

Dr Hossain Zillur Rahman, Founder-Chair, Power and Participation Research Centre (PPRC) presented that he believes that fifty years ago the dominant concern of independent Bangladesh was that of economic future, however five decades later the Bangladesh economy has baffled observers through the remarkable story of economic transformation and resilience. Although, economic development has stunned many, but as a twist of fate there has not been much political development.

This deficit in political development is holding Bangladesh back from realizing its foundational dream of building an inclusive and humane society.  The paper mentions six defining achievements of Bangladesh’s transformation: i) managing natural disasters; ii) ensuring food security; iii) integrating with the global economy; iv) building of feeder roads that have reduced the urban-rural divide; v) establishing women as social and economic actors; vi) reducing fertility.

However, there is an alternative take on the drivers of change which is sparsely discussed. After independence the common people embraced the promise of technology, and a culture of solution-centric innovation was fostered at the grass-root level. As a consequence, there was reality-grounded development. The return of contested politics through the political renewal of the 1980s, as well as policy entrepreneurship in certain critical sectors, had a large system-wide impact.

There have been two turning points in the 50 years journey. The first one was in the 1990s, when there was ideological embrace of competitive capitalism and the market economy. There was contested politics and greater political accountability. However, the second turning point of 2010 is somewhat a contrast. One-third of youth were not in education, employment or training, competitive capitalism turned into a privilege economy, and school enrolment increased but quality of education fell.

Although women emerged as critical change agents, but gender-based violence became rampant. Stemming from poor governance, a culture of impunity and institutionalized corruption emerged shackled Bangladesh from realizing its true economic potential. The new reality of the private sector is less about competitive prowess in the marketplace and more about the proximity to power in establishing economic contracts. It is alarming as such entities work to hinder the growth of a competitive private sector and only seek private benefits of individual interest.

This paper states that Bangladesh’s fifty-year journey is thus Dickensian in its complexity. The transformation certainly has been deep and real, but uncertain in terms of the quality completion of the middle-income transition. The author believes that although Bangladesh stands on solid achievements, but its dominant development paradigm shows narrow focus on growth only rather than the foundational dreams of multi-dimensional prosperity underpinned by justice and quality of life.

There is now a ‘new normal’ of political governance in Bangladesh that constitutes of:  i) extreme intolerance of non-sanctioned political governance; ii) marginalization of grass-root actors and consequent loss of accountability; iii) purposeful encroachment into social space; and iv) corruption innovations, such as unjustified project cost escalation, and land-grabbing. These forces are fueling a new paradox of ‘uncertainty despite stability’. There are different puzzles that Bangladesh must solve in order to democratize the ‘middle-income’ dream. The country must expand the idea of development beyond narrow growth-statistics such as GDP growth to more encompassing indicators such as quality of life, said Dr Iftekharuzzaman, Executive Director, Transparency International Bangladesh (TIB) shared his opinions as the discussant of the paper.