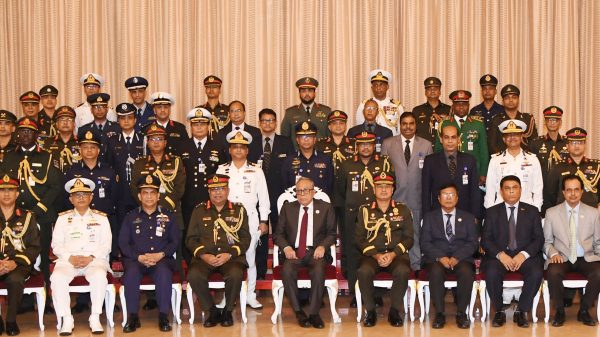 “With the NDC graduation, I hope, you would make a huge difference in serving your countries . . . and set examples for others,” he told the graduates of the NDC and AFW Course-2021 at Durbar Hall of Bangabhaban here.

The head of the state added that the graduates, through their leadership quality, would provide a fresh impetus to the quest of further development.

Welcoming the graduates and others concerned from home and abroad at Bangabhaban, the President said 2021 is a landmark year in the history of Bangladesh, as the country is celebrating twin two mega events – – the Golden Jubilee of its Independence and the Birth Centenary of country’s Father of the Nation Bangabandhu Sheikh Mujibur Rahman.

Abdul Hamid also extended his sincere thanks and appreciation to 27 foreign participants of 13 countries for joining and successfully completing the important course at NDC, the prestigious institution of Armed Forces.

He said the National Defence College has been playing a very significant role in increasing professionalism and skills of the members of the Armed Forces since its inception in 1998 and the NDC has been equally accepted and acclaimed in non-military domain too.

Being trained in this institution, the President said a good number of high officials from civil administration are making remarkable contributions to national and international arena.

He said through the courses, the graduates have learned various aspects of national security, national development, leadership and policy making as they also studied different problems of governance and its solutions as well.

“I am also very happy to learn that the War Course Graduates have gained knowledge on leadership and the mechanism of warfare at operational level relating to the present global context,” Abdul Hamid said.

Explaining the standard of NDC, Bangladesh and its increasing recognition, the President reiterated that Bangladesh would relentlessly pursue its vision of establishing and maintaining friendly relations with all countries across the globe as envisioned in the foreign policy of Bangabandhu.

Recently Prime Minister Sheikh Hasina has been conferred with the United Nation’s “SDG Progress Award” for Bangladesh’s steady course of action to end poverty, protect the planet and ensure peace and prosperity for all, he said, terming it a matter of great pride for all.

The present world is making great leaps in terms of innovation, change and progress, Hamid said, adding, “Now-a-days, the issues of national security encompass economic freedom of people and national development too.”

Therefore, the President said, the national security experts must bear adequate knowledge on economic emancipation and national development along with the idea of traditional security of the state.

At the outset of his speech, Abdul Hamid recalled with profound respect the architect of country’s independence Father of the Nation Bangabandhu Sheikh Mujibur Rahman and also paid his deep homage to the martyrs and valiant sons of the soil, who made supreme sacrifices in the war of Liberation.

Secretaries concerned to the President, high-ranking civil and military officials, faculties, staff officers, and course members of NDC and AFWC, among others, were present there.