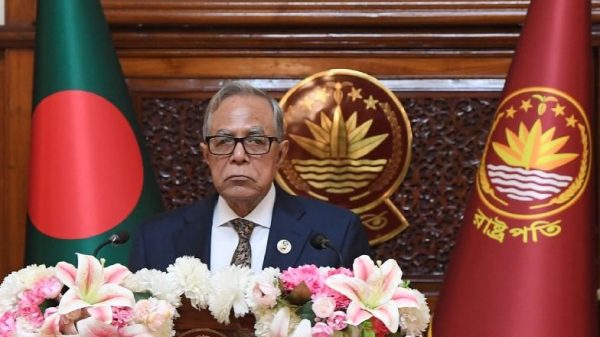 Expressing his firm determination to curb corruption from the country at any cost, President M Abdul Hamid today asked all concerned to socially boycott the corruption and corrupt people.

“Boycott the corruption and corrupt individuals socially. . . There is no
alternative to forging a universal resistance against corruption in
establishing rule of law,” he said.

The head of the state also asked to start campaign against corruption from
respective houses as his recorded speech was aired at an anti-corruption
discussion at the Bangladesh Shilpakala Academy here.

President Hamid said the honest, sincere and devoted people need to be
evaluated socially as it would help reduce the corruption in the society.

Urging the ACC officers and employees to show utmost neutrality and
morality at all levels, he directed to ensure that the image of the entire
ACC is not tarnished for some individuals’ controversial activities.

Noting that corruption is the main obstacle to development, Abdul Hamid said, “The identity of a corrupt person is that he or she is a corrupt.

Whatever party a corrupt person belongs to, he or she must be brought under the law if any corruption is committed.” The head of the state said the ACC will have to play its firm role in curbing corruption in the days to come.

At the same time, Hamid called upon all concerned not to tempt any person or organization to gain any unethical advantage through corruption.

“None is born as corrupt,” he said, adding that family, social and environmental factors have the greatest impact on individuals.

Abdul Hamid ordered the ACC officials concerned to gain people’s confidence through their positive activities, saying, “The people who would abuse the state power and responsibilities should be strictly controlled and brought to justice under the existing law.

“Corruption is an issue that has been embedded in society since the ancient time. No country in the world is completely free from its ill effects,” he observed. The President said it was not possible for the Anti-Corruption Commission alone to curb corruption unless anti-corruption sentiment is awakened in the society.

He said it was possible to reduce corruption to a tolerable state only by creating anti-corruption awareness among the people and providing exemplary punishment to the corrupt individuals.

Abdul Hamid mentioned that one of the goals of the state, which achieved independence through long struggles and great Liberation War under the leadership of Father of the Nation Bangabandhu Sheikh Mujibur Rahman, was to build a humane, non-discriminatory, poverty-free, just and corruption-free state as well as society.

He said Bangabandhu never compromised with corruption in his lifetime and stressed on building a corruption-free state in his all speeches. Highly appreciating the activities of ‘Satata Store’ and ‘Satata Sangha’ in different educational institutions as an innovative initiative, he said it would help the tender-hearted students to be more ethical.

“Moreover, the anti-corruption committees, comprising conscious citizens at the metropolitan, district and upazila levels, will also create anti-graft attitudes in society and help the ACC to identify the corrupt,” the President said.

The President put emphasis on giving training to the ACC staff at home and abroad to make them more efficient in investigation into different graft cases.

“Corruption spreads due to a mismatch between want and power. Therefore, corruption in society will reduce only if we get used to live in harmony with the income and expenditure,” the President opined.

Hamid said in the current era of globalization, along with technological advancement, the patterns of doing corruption has also been changed. Therefore, in order to bring them under the law, the ACC also needs to be more tactical and technology dependent.

In line with the constitution, the President hoped that the ACC would continue to provide better services with impartiality and utmost professionalism by ensuring the proper use of modern technology upholding the basic human rights and democratic values ??of the people.