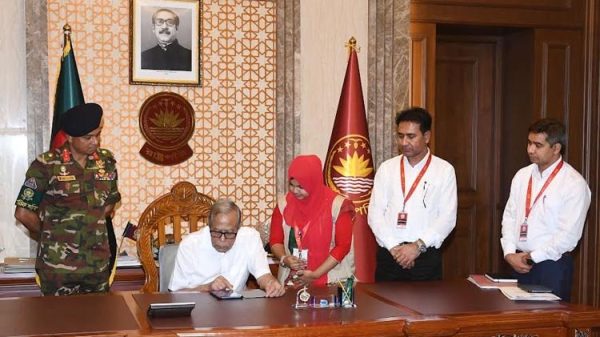 President M Abdul Hamid today filled up a form of household data at Bangabhaban as part of the data collection programme under the Population and Housing Census 2022 undertaken by the Bangladesh Bureau of Statistics (BBS).

On the occasion, BBS enumerators collected the data of the President and his family members with households this evening.

During the programme, President Hamid said the housing survey can play an important role in ensuring proper service delivery to mass people.

The President asked all the people involved in the households data collection to gather necessary information from the citizens cordially and honestly so that the real picture of the survey can be depicted.

He also urged people to provide necessary cooperation in this regard to make the ongoing programme a success.

Referring to the necessity of this programme, Abdul Hamid said population and housing census data is very important in formulating as well as implementing the national plan.

He called upon the people to make the census a success with accurate information.

The Head of the State directed all concerned to be more vigilant so that no one is left out of the census and none is included more than once.