President for formulating time-befitting curricula at each university 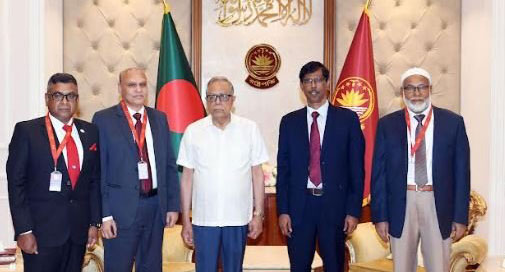 President for formulating time-befitting curricula at each university

President M Abdul Hamid today asked the university authorities to formulate a time-befitting curriculum at every university of the country coping with the world competition.

The President came up with the directive as the Vice-Chancellors of Bangamata Sheikh Fazilatunnesa Mujib Science & Technology University (BSFMSTU) and Bangabandhu Sheikh Mujibur Rahman Aviation and Aerospace University (BSMRAAU) separately paid courtesy call on him at Bangabhaban here this evening.

The Bangabhaban spokesman said, “During the meeting, the vice-chancellors briefed the President on the overall activities, including academic and infrastructural development of their respective universities.”

Terming the science and technology as the driving forces behind the development at the age of globalization, the President said the new and future generations of the country need to be educated based on science and technology to keep pace with the world and make Bangladesh a developed and prosperous country by 2041.

Noting that it is not possible to meet the demand of the present age in the traditional curriculum, the President said timely curriculum should be formulated at the universities.

Besides, President Hamid directed to intensify research activities and stop corruption and nepotism at all levels.