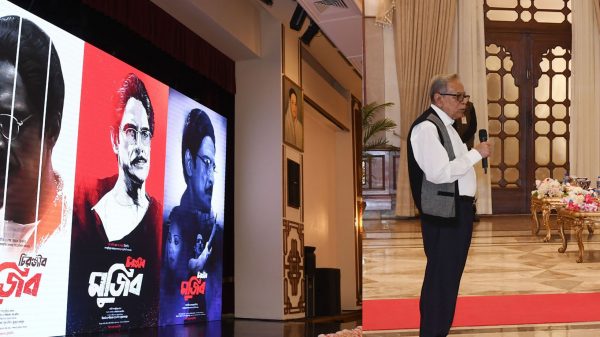 President M Abdul Hamid today asked all concerned to make more films like “Chiranjib Mujib” to spread the ideals, life and works of the Father of the Nation Bangabandhu Sheikh Mujibur Rahman among the new generation.

He also underscored the need for highlighting the true history of Bangabandhu and Bangladesh through films so that the new generation could learn about the political discernment of Bangabandhu.

The President made the remarks after enjoying the screening of the full-length film “Chiranjib Mujib” based on ‘The Unfinished Memoirs’ of the Father of the Nation at Bangabhaban Durbar Hall on November 28 evening.

Referring to the issue of Bangabandhu’s political determination in the film “Chiranjib Mujib”, President Hamid said this film would immensely inspire the progeny to fight for establishing the rights of people.

The head of the state thanked all concerned involved in making of the film ‘Chiranjib Mujib’.

Abdul Hamid, along with his family members and secretaries concerned witnessed the three-hour long film from 6:30 pm.

Before the screening of the film, film director and Prime Minister’s Speech Writer Md  Nazrul Islam and film producer Liton Haider narrated the content of the film “Chiranjib Mujib”.

After enjoying the full-length film, the President unveiled trailer of the film “Chiranjib Mujib.