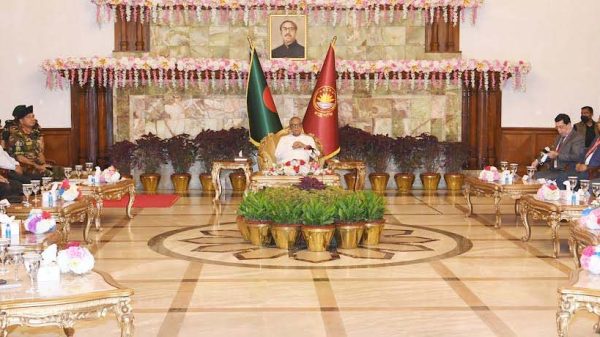 President M Abdul Hamid today asked the authorities of all universities to stop corruption and nepotism as well as intensify the research activities.

The Head of the State came up with the directives as a delegation of the Vice-Chancellors (VC) of 19 public universities, who took admission test in cluster system, paid a courtesy call on him at Bangabhaban here on June 19  evening.

President Hamid called for the inclusion of new demand-driven topics and the development of up-to-date curriculum in the universities to cope with the competitive world to empower the young generation in the days to come.

Led by Professor Farid Uddin Ahmed, Vice-Chancellor of Shahjalal University of Science and Technology, the delegation briefed the President on the overall activities of their universities including various aspects of the admission test in a cluster manner, during the meeting.

The President thanked the vice-chancellors for taking the admission test in a cluster system and said it has greatly reduced the sufferings of students and parents.

Secretaries concerned of the President’s Office were present there./(BSS)