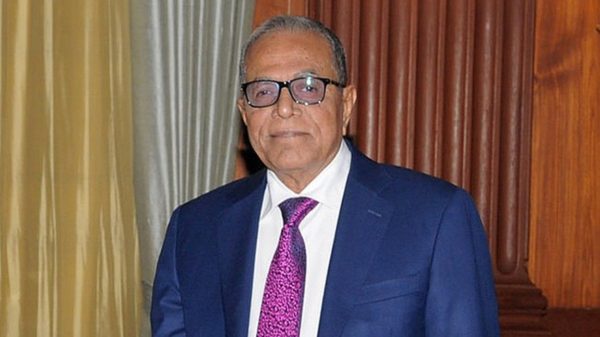 President M Abdul Hamid is set to visit his ancestral district Kishoreganj from August 22-25 on a four-day tour to attend several programmes.

“The President will leave for Kishoreganj on August 22 (Monday) on a four-day visit … He will inspect several development works and hold a series of
view-exchange meetings with local representatives, civil society members and
professionals at Mithamain, Austagram and Itna,” his press secretary Md
Joynal Abedin told BSS today.

On the day, the head of the state will leave for Kishoreganj by a helicopter
around 3:30 pm. After reaching Mithamain, he will be given a guard of honor
at Mithamain Dak Bungalow around 4 pm.

He will participate in a view-exchange meeting with local dignitaries and
public leaders at Rashtrapati Md Abdul Hamid Auditorium at Mithamain around 7:30 pm.

On August 23, the President will visit various development works, including
the Rashtrapati Abdul Hamid Foundation of Mithamain upazila around 11 am.

After that, he is scheduled to leave for Austagram upazila from Mithamin by
road. He will visit various developmental works on reaching Austragram.

Abdul Hamid will also hold a view-exchange meeting with members of various professional bodies and local officials there around 7:30 pm.

On August 24, the President will visit various developmental works of
Mithamain upazila around 11 am. He will then visit the under-construction
Mithamain Cantonment by engine boat around 3 pm, according to the programme schedule.

Subsequently, the President, with motorcade, will travel to Itna upazila and
will visit various development activities there at about 5 pm.

During the tour, the President will spend nights at his ancestral residence
at Kamalpur of Mithamain upazila.

The head of the state is scheduled to return to Dhaka on Thursday (August 25) afternoon.

Meanwhile, a tight security measures will be ensured centering the
President’s visit to Kishoreganj.