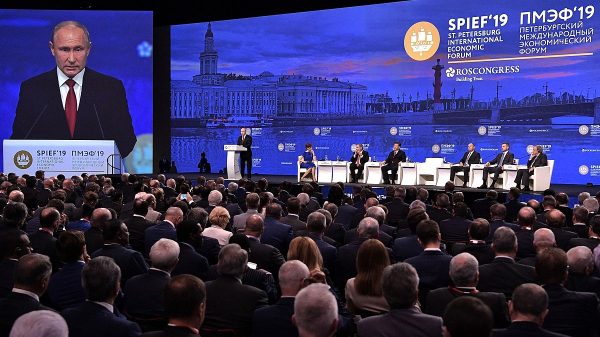 The President approved a list of instructions on July 20 2022 following the 25th St Petersburg International Economic Forum, held on June 15–18, 2022.

The instructions given to the Government of the Russian Federation concern, in particular, the terms of the preferential mortgage programme; the development of additional measures aimed at increasing the birth rate and supporting families with children; increasing, in 2023–2024, the federal budget allocations for the construction, modernisation, and capital repairs of rural cultural centres and modernisation, capital repairs and reequipment of theatres and museums founded by regions and municipalities; providing, in 2022–2025, additional annual federal budget allocations to finance the state programme on Integrated Development of Rural Areas; the oversight and monitoring system reform; and implementing, in 2023–2025, modernisation programmes in cities in the Russian Far East where it is critical to radically improve the quality of life.

Further instructions to the Government include the development of a comprehensive programme to modernise housing and utilities services; projects to create a comfortable and convenient urban environment in small towns and historical communities; a higher volume of lending to projects under the Project Finance Factory programme; adjusting the budget rule and making the necessary amendments to the Budget Code of the Russian Federation in order to ensure the predictability of budget policy and create the right conditions for taking the maximum advantage of the foreign economic situation to accelerate economic growth.

A number of instructions to the Government concern the key parameters of the preferential regime for operation in industrial clusters.

The Government of the Russian Federation and the Bank of Russia have been instructed to take the necessary action to launch a preferential industrial mortgage programme (for the purchase of finished production facilities) at a rate of no more than 5 percent per annum for the entire loan period, as well as to submit proposals on providing fast-growing high-tech companies with financial resources to relieve the pressure of the sanctions and inaccessibility of external financing.

The instructions given to the Government of the Russian Federation, regional executive authorities and the Russian Post joint-stock company, with the participation of other interested organisations, have to do with creating a system to help entrepreneurs and self-employed citizens living in small towns, remote villages and rural areas, to promote and market the goods they make throughout Russia, as well as including measures to create such systems in the Small and Medium-Sized Businesses and Support for Individual Entrepreneurial Initiative national project.

The Government of the Russian Federation, the Bank of Russia and regional executive authorities have been instructed to be guided by the principles of openness, social justice, advanced infrastructure development, freedom of private initiative, long-term macroeconomic stability, and Russia’s economic and technological sovereignty when drafting their strategic documents and implementing economic policies.

The instructions given to the Government of the Russian Federation and the Supreme Court concern making amendments to laws to achieve the full or partial decriminalisation of certain business offences; reviewing the grounds for arresting executives and members of the management of commercial entities and extending the periods of their detention and pre-trial investigation in economic crime settings, and making restraint measures other than arrest the preferred choice so that they could continue their business operation; raising the brackets for significant, large and especially large amounts of damage or other measurable criteria used for qualifying economic crimes.