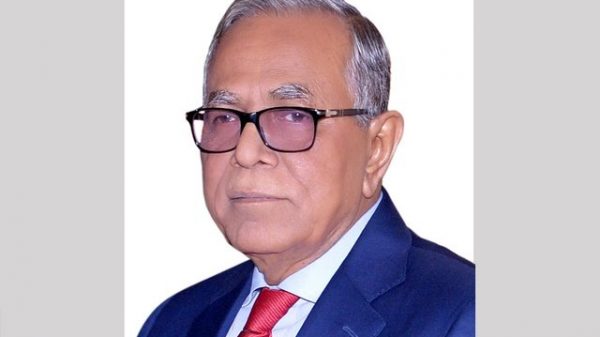 President M Abdul Hamid today sought a strong and spirited youth network to build resilience against hardships and for parity and prosperity in society as he virtually addressed a function from Bangabhaban here today.

“The youth are the frontier force of our recent development . . . It is our hopeful and confident prediction that this youth will bring about a better future,” he told the grand closing ceremony of the year-long ‘Dhaka OIC Youth Capital 2020’, one of the largest platforms to unite youth worldwide.

The President added: “The youth can achieve anything when united . . . Bangladesh has a majority of youth, having one of the highest demographic dividends in the world.”

He noted that Bangladesh has been marching towards development since the last decade and the rise of the nation has been an example for others.

In crisis, the youth has always put remarkable contributions, just as they did in the recent outbreak of COVID-19 pandemic, he observed.

The youth will absorb the philosophy of “Resilience for Parity and Prosperity” within and keep contributing to the society and humanity, the President hoped.

The head of the state said as the world is changing, it is the youth who are the herald of progress and can adapt faster.

The Organisation of Islamic Cooperation (OIC) is the second largest inter-governmental organization of the world after the United Nations (UN). Bangladesh became a member of the OIC in 1974 and has a strong tie with the organisation since then.

Expressing the deep gratitude to the OIC and the Islamic Cooperation Youth Forum (ICYF) for choosing Dhaka as the OIC Youth Capital 2020, the President said with common beliefs and shared visions, the OIC member countries would be able to build a better tomorrow through cooperation.

“And this event has added a valuation as at the time of celebrating two mega events – – Golden Jubilee of Bangladesh’s Independence and the Birth Centenary of the Father of the Nation Bangabandhu Sheikh Mujibur Rahman,” President Hamid added.

Recalling the uncompromising and charismatic leadership quality of Bangabandhu during his youth life which the new generation can be followed, the President said Bangladesh Prime Minister Sheikh Hasina is leading the journey as she has been inspiring the youth just same as her father did.

Sharing about the youth and youthful spirit of Bangabandhu and the history of the golden youth of Bangladesh, President Hamid said, “Very few in the history of humankind have done what Bangabandhu accomplished in his lifetime. History and its annals come up automatically whenever one speaks about Bangabandhu.”

The Father of the Nation always got himself involved in helping others and ameliorating their sorrows. Instead of bothering about his own happiness and sorrow, he used to worry about others, he mentioned.

The President said Bangabandhu used to start protesting whenever he saw injustices, exploitations and repressions as he never became confined within his own self or the domain of his family.

Bangabandhu truly inspired the youth to fight for freedom and justice and under his leadership, a remarkable generation of youth rose who sacrificed their lives for freedom, dedicated themselves to build a nation, he stated.

“The youth will face it boldly, fight it strongly and win it eventually. Because, in my experience, I have always observed that the power of youth always wins,” the head of the state believed.