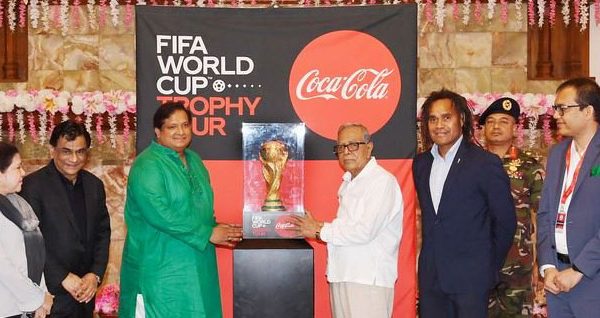 President M Abdul Hamid witnessed the “FIFA World Cup Trophy’-2022” at Bangabhaban here as the trophy arrived in Dhaka this noon , ahead of the upcoming FIFA World Cup slated to be held in Qatar.

The trophy, sponsored by Coca-Cola, one of the sponsors of the FIFA World Cup, arrived here today with the help of the Ministry of Youth and Sports and the Bangladesh Football Federation (BFF), for a 36-hour tour, giving Bangladesh fans the chance to experience football’s most coveted prize.

A chartered flight, carrying the original FIFA World Cup Trophy landed at Hazrat Shahjalal (R) International Airport from Pakistan at 11:25 am today. Cristian Lali  Karembeu, and a seven-member FIFA delegation were with him.

The FIFA World Cup Trophy started its world tour in 56 states, including Bangladesh, from Dubai on May 12, ahead of the Qatar World Cup 2022.

President Hamid welcomed the Glorious World Cup Trophy as it reached at Bangabhaban in the afternoon.

None has the right to touch the trophy at present, except the players of the World Cup winning team and the Head of State. The World Cup trophy was brought to Bangabhaban today to show it to the President.

The President thanked all concerned officials, including FIFA, for bringing the World Cup Football Trophy to Bangladesh.

This will make the players, organizers and supporters more enthusiastic about football and Bangladesh football will move forward in the international arena in the days to come, Abdul Hamid hoped.

Earlier, before it, the replica of the original trophy came here in 2013, said a BFF official.

After a 36-hour tour of Bangladesh, the 2022 Football World Cup Trophy will fly to East Timor at 12:10 pm tomorrow.

The President also took part in a photo session on the occasion.

Secretaries to the President, Secretary to the Youth and Sports Ministry and senior civil and military officials were also present there.