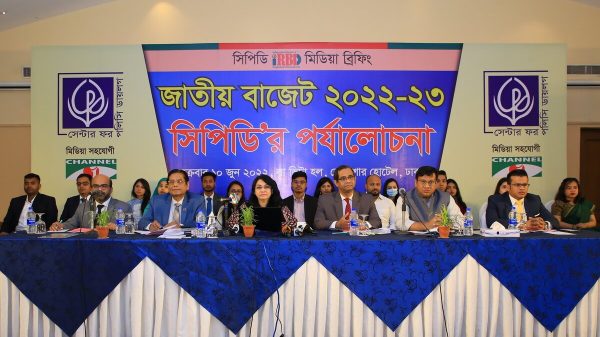 The Centre for Policy Dialogue (CPD) organised a media briefing session titled CPD’s Analysis of the National Budget FY2022-23 on Friday at a city hotel as immediate comments on the national budget for FY 2022-23 under its Independent Review of Bangladesh’s Development (IRBD) programme.

The think tank has suggested recommendations to be accounted by the government are:

The budget for FY23 needed to be innovative in approach, flexibility in allocative priorities and target specific in terms of budgetary measures to address the attendant challenges.

The budget speech could diagnose the symptoms, but failed to prescribe the required medication.

Better identification of contexts and challenges.

Expressing accountability by delineating the progress of past promises will be the key.

Continuation of fiscal measures to protect domestic industries is needed.

Harmonization of tax structure in case of export-oriented industries will be crucial.

Inflationary issues need to be addressed in the proposed budget.

Assure citizens regarding keeping the administered prices at the same level.

The budget has welcomed illicit or illegal income and capital flight.

CPD had earlier emphasized the need for protecting the low and limited earners in the country and focusing on inflation management and restoration of macroeconomic stability by coming out of GDP growth obsession.

Allow tax concession to essential commodities at both import and domestic stages.

Expand social safety net provisions both in terms of coverage and the amount of per capita allocation.

Bangladesh’s budget transparency has decreased over the years due to fewer number of budget documents being publicly available.

Six important observations can be made for Annual Development Programme (ADP) FY23.

No significant change in the structure of ADP allocation for FY23 can be observed.

Utilisation of foreign aid will be critical for ADP implementation.

The problem site Carryover And Time-overrun projects will persist in FY23.

The delay in implementing mega projects will also have repercussions in the form cost escalation.

The prioritization exercise of ADP projects is confusing.

269 completing projects have been tagged as “low priority”.

17 of the 20 mega projects in the ADP for FY23 are marked as “low priority” but have received significant allocations.

However, most of the unapproved new projects (633 and another 150 seeking foreign funds) have been tagged as “high priority”.

ADP for FY23 again marked with high number of projects with ‘symbolic allocations’.