Putin to hold talks with Erdogan 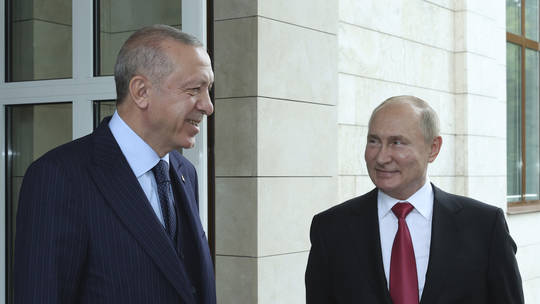 Putin to hold talks with Erdogan

Asked by Russian media on Sunday whether the rumored talks would take place, the official said the conversation was “in the plans.” Earlier in the day, the Turkish president had announced talks with both Putin and his Ukrainian counterpart Volodymyr Zelensky amid the ongoing conflict between Moscow and Kiev.

“I will have phone conversations with both Russia and Ukraine on Monday. We will continue to encourage the two parties to maintain channels of dialogue and diplomacy,” Erdogan stated.

Turkey has taken a neutral stance in the conflict that broke out in late February. Ankara has maintained ties with both Ukraine and Russia, refusing to join Western sanctions against Moscow and striving to assume the role of a mediator in the conflict.

In late March, Turkey hosted high-profile Russia-Ukraine talks. While both sides signaled that certain progress had been made after the meeting, the talks ultimately failed to yield any results. Hostilities have continued and the negotiation process has effectively stalled, with Kiev and Moscow trading blame for the lack of progress toward striking a potential peace deal.

Russia attacked its neighboring country following Ukraine’s failure to implement the terms of the Minsk agreements, first signed in 2014, and Moscow’s eventual recognition of the Donbass republics of Donetsk and Lugansk. The German- and French-brokered protocol was designed to give the breakaway regions special status within the Ukrainian state.