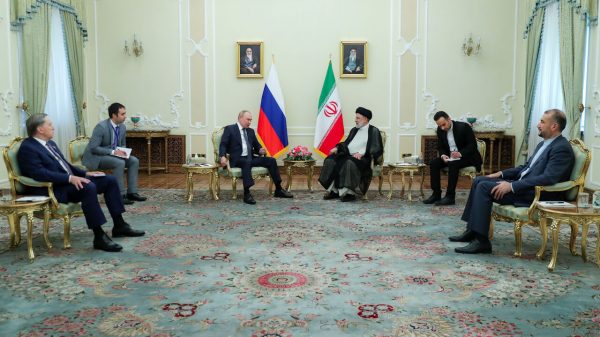 Tehran, IRNA – President Ebrahim Raisi said here on Tuesday that the record of successful cooperation between Iran and Russia in anti-terrorism campaign is now at the service of strengthening regional security and stability.

President Vladimir Putin who is visiting Iran to attend the Astana Peace Process Guarantor Countries went to the President’s Office for a meeting with the Iranian President Ebrahim Raisi on Tuesday evening.

The two sides in the meeting discussed the latest status of bilateral ties, which has grown drastically during the recent months, especially in economic, security, infrastructure, energy, trade, and industrial fields, expressed satisfaction over the reached progress, and expressed will for further strengthening the bilateral ties.

They also agreed about the reached progress in campaign against terrorism, and stressed need for expansion of cooperation in regional and international fields, especially in strengthening regional cooperation and securing the stability of independent countries.

President Raisi said that the expansion of bilateral relations is noticeable, arguing that after his meeting with President Putin in Moscow, and in Ashgabat, the process of expanding and deepening bilateral cooperation has been continuous, and it is still in need of further strengthening.

The Russian President Vladimir Putin, too, said in the meeting that he is pleased to be in Iran, whose nation’s hospitality is famous, and welcomed comprehensive cooperation, especially in security and international fields.

“Iran and Russia have great shares in resolving the Syrian crisis,” he added.