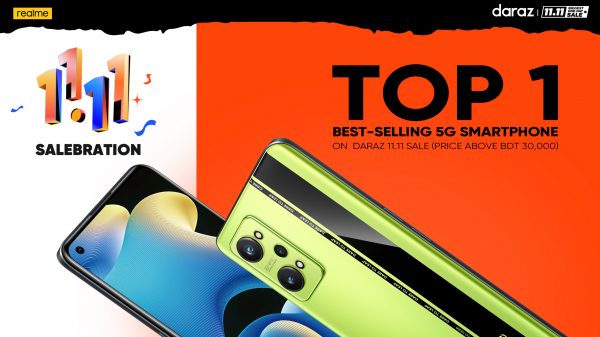 Many top-notch realme phones and devices along with exciting offers and discounts were offered during this campaign. realme GT NEO 2 was offered at BDT 34,990 (applying Daraz voucher and pre-payment discount), with a discount of Tk. 5,000 from the original price. realme has received huge response from the buyers at this campaign. realme GT NEO 2 has become the top selling 5G smartphone. Within a very short period, all the units of GT NEO 2 were sold out.

Meanwhile, 16,000 units of realme narzo 50i were sold out within a few minutes of the initiation of the 11.11 campaign, creating a new record.

Apart from these, other realme phones, namely realme GT Master Edition, realme 8, realme 8 5G, realme C25Y, realme C20A, realme C11, realme C21Y and realme C25S, were on sale at 11.11 campaign, all of which have got wide response from the buyers.

realme is moving to high-end market. That’s why, they have brought in GT series, their flagship series.

A few days back, realme launched GT Master Edition which has been appreciated by cross-sections of people. This GT Series has a great impact in the market in terms of selling. This is what has been attested by great sale records of GT NEO 2 at 11.11 campaign.

To fortify their position in the high-end market, realme will be introducing more GT series phones in the days to come.

Meanwhile, realme is developing a diverse portfolio of 5G products with an aim to offer 100 million 5G phones in the next three years to the young users. Besides affordable 5G phones, realme will also bring more AIoT products to young consumers as realme has entered AIoT 2.0 development phase with its advanced ‘1+5+T’ strategy.