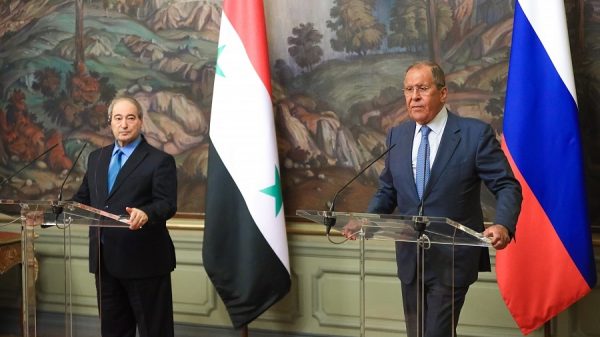 We held intensive talks with Minister of Foreign Affairs and Expatriates of the Syrian Arab Republic Faisal Mekdad. The atmosphere was trust-based and friendly as is our tradition.

We focused on the situation in Syria and around it. We confirmed Russia’s invariable support for the need to respect the sovereignty, independence and territorial integrity of the SAR and the right of the Syrians to determine their future themselves fully in line with UN Security Council Resolution 2254.

We concentrated on the tasks of promoting a comprehensive settlement in the republic. We noted the importance of the Astana format that continuously proves to be the most efficient international mechanism for facilitating long-term normalisation.

We reviewed the most recent summit of these countries, the guarantors of this format, which took place in Tehran on July 19 of this year. We hope to hold a regular, 19th international meeting on Syria in Nur-Sultan before the end of the year.

We also talked about the activities of the Syrian Constitutional Committee that was established under the Syrian National Dialogue Congress in Sochi in 2018 under the aegis of the Astana Troika.

We will continue to support the productive work of the Constitutional Committee with a view to allowing the Syrians themselves to come to terms on constitutional reform without outside interference. The reform should be approved in a national referendum after the committee reaches the relevant agreement. We will continue our relations with the UN Secretary-General’s Special Envoy for Syria Geir O. Pedersen in this area.

We discussed the humanitarian situation in Syria, laying emphasis on the need to increase international aid to Damascus for post-conflict recovery.

We emphasised the importance of ensuring faithful implementation of the provisions of UN Security Council Resolution 2642, adopted in July of this year. Under this resolution, the donors and the UN Secretariat must report on how they are carrying out the Security Council’s call for support projects for the soonest recovery of the basic infrastructure in Syria.

We reaffirmed our intention to continue our vigorous efforts to help Syrian refugees return home. These efforts are being impeded by the politicised approaches of the Western states that are actually trying to compel forced refugees to remain in their countries of temporary stay without announcing this directly.

We talked at length about the bilateral cooperation that covers almost the entire spectrum of relations between our countries. We are seeking to further build up interaction in all areas. As for the economy, we reaffirmed the coordinating role of the Permanent Russian-Syrian Commission for Cooperation in Trade, the Economy, Science and Technology. The co-chairs of the commission last met in Moscow in May, 2022. We agreed to hold a full meeting before the end of the year, for which a large package of documents will be prepared.

We resolutely condemned Israel’s dangerous practice of attacking targets on Syrian territory, including the disturbing incident that took place on June 10, 2022, when the international airport in Damascus was attacked, and then the subsequent strikes near the port of Tartus. We demand that Israel honour the [relevant] UN Security Council Resolution, as well as the sovereignty and territorial integrity of the SyrianArabRepublic. Neither Syria’s sovereignty nor the fundamental standards of international law should ever be violated by anyone. This refers to several other countries that are engaged in illegitimate activities in Syria. We talked about the United States’ activities related tothe encouragement of separatism in violation of the [relevant] UN Security Council resolution.

We discussed the broader aspects of the situation in the Middle East and noted the shared satisfaction with how relations between the Syrian Arab Republic and the Arab countries that are members of the League of Arab States are returning to normal. We are ready to facilitate the development of this positive trend in every way.

We expressed gratitude to our Syrian friends for their complete understanding of what is happening in Ukraine and around it. Our partners reaffirmed their support for Russia’s efforts to achieve the set goals. Damascus is aware of what has led to the current situation, namely, that for several decades the West has flatly refused to meet its commitments to observe the principle of indivisible security and, despite its own pledges to the contrary, continued to expand NATO to the east, simultaneously moving its military infrastructure closer to the Russian Federation’s borders and approving doctrinal documents that directly call Russia an adversary and an enemy.

We appreciated Damascus’ announcement last June on recognising the Donetsk and Lugansk people’s republics. We see this as our Syrian friends’ commitment to a fundamental principle, according to which people have the right to determine their future on their own. The Ukrainian state has not recognised the legitimate rights of the residents of the Donetsk and Lugansk regions and has not represented their interests. In this case, the United Nations General Assembly Declaration on the Principles of International Law of 1970provides for the full recognition of the priority of people’s right to self-determination if a central government fails to represent their interests. I believe there is no need to convince anybody that the Kiev regime has long since stopped considering the interests of the people in Donbass.

We agreed to further maintain close coordination in our efforts in the UN to defend the principles of international law. We have another common format, which is the Group of Friends in Defence of the Charter of the United Nations. Some20 countries have now joined this association. We will be defending the priority of the principles written into the United Nations Charter that currently are subject to aggressive attacks by the US-led collective West.

I believe it was useful for us to compare notes. I thank my colleague and friend for his cooperation, and I will now ask him to say a few words.

Question: How do you see the implementation of the agreements on Syria that were reached at the tripartite summit in Tehran? I am referring to the agreements that the presidents of Russia and Türkiye subsequently discussed during their latest meeting in Sochi.

Sergey Lavrov: These agreements are being carried out in full. The three presidents adopted a joint statement at the summit in Tehran on July 19 of this year. This is an open document that clearly confirms the need to respect the sovereignty and territorial integrity of the SAR and to prevent any action that encourages separatist trends or other steps violating UN Security Council Resolution 2254. It notes that Israel’s continuing strikes against Syria are unacceptable. It sets forth the goals facing those in the mechanism of international meetings on Syria (18 meetings have already taken place) as regards efforts to promote the intra-Syrian dialogue and to create conditions for productive work in the Constitutional Committee.

All these issues are regularly reviewed at the foreign and defence minister level and by other experts in third countries. When we meet in the bilateral format (as we are today), we concentrate on the practical steps that are necessary to fulfil the agreements reached by our leaders in full. This issue was emphasised during the latest visit to Russia by President Recep Tayyip Erdogan when he discussed it in detail with President of Russia Vladimir Putin.  It will become one of the central issues at my regular meeting with the Foreign Minister of the Islamic Republic of Iran in the near future.

Question: Is it true that Russia is mediating the normalisation of relations between Ankara and Damascus? How is it possible to prevent a military escalation in the north of Syria?

Sergey Lavrov: The Russian Federation has been involved in normalising relations between Syria and Türkiye for many years – since the Astana format was set up. Russia, Türkiye and Iran are the guarantors of this process. Syria is a participant as represented by pro-government and opposition delegations. Representatives from Damascus and Ankara meet on the sidelines of international meetings on Syria (a regular meeting will take place in Nur-Sultan); there are several platforms. The entire implementation of UN Security Council Resolution 2254 and of the Astana format agreements is aimed at the full normalisation of relations between the neighbouring countries in the context of restoring the territorial integrity, sovereignty and political independence of the SAR.

My colleague just answered in detail the question on potential developments in the north of Syria. I do not need to repeat what he said.

The main goal is to prevent new military actions, and to come to terms via diplomatic channels on the foundation of the principles that existed in Syria- Türkiye relations before as well. Thus, the goal of reducing the terrorist threat goes back to 1998. Syria admits that this threat exists, and is willing to be fully responsible for its sovereign territory after regaining full control over it. We support this position.

Question: When does the Russian Federation expect an answer from the United States on the Iran nuclear deal?

Sergey Lavrov: Obviously, a question on the US’s delayed response to the Iran nuclear document should not be addressed to me. About a year ago, the United States loudly and assertively (in its usual style) announced that Russia had blocked the agreement on resuming the Joint Comprehensive Plan of Action (JCPOA) on Iran’s nuclear programme. It didn’t cite a single fact to prove this. A year passed. Russia has long confirmed its consent for the version of the document that was presented to the participants in the process. The United States has not announced a response so far.

If you have a correspondent in Washington, have your journalist ask this question there. If not, you can do it online.

Question: What do you think about the assassination of journalist and political scientist Darya Dugina? Is this an act of intimidation or the settlement of a personal grievance?

Sergey Lavrov: I cannot judge whether it was an act of intimidation or a personal grievance. I believe this is a barbarous crime that cannot be forgiven. As far as I know, the Federal Security Service has already established the facts. The investigation is ongoing, and I hope it will be completed soon. There can be no mercy for this crime’s organisers, contractors or executors.