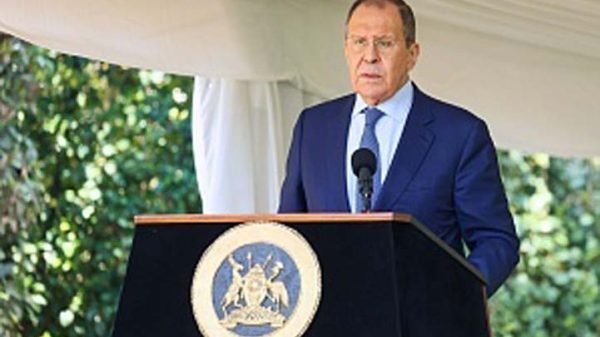 The new geopolitical reality that is taking shape in the wake of the unprecedented sanctions campaign unleashed by the collective West under the pretext of countering Russia’s special military operation to protect the republics of Donbass was discussed in detail at a meeting with President Museveni. The sides shared overlapping assessments regarding the importance of ensuring food security in the developing world, including the African countries. Sergey Lavrov confirmed Russia’s unwavering commitment to honouring its obligations related to exporting supplies of critical foods to the countries in need, including the corresponding package of agreements reached on July 22 with the involvement of the UN.

When discussing pressing matters related to further strengthening bilateral ties, it was stated with satisfaction that our countries have much to show for the 60th anniversary of diplomatic relations. Trade is growing strongly, parliamentary and interparty ties are deepening, and cooperation in education and healthcare is expanding.

The sides reviewed ways to increase the pace of interaction in trade, economic and investment partnerships, including the implementation of joint projects in oil refining, energy, transport infrastructure and agricultural production. The potential for introducing digital technologies in industry and the service segment was noted.

It was decided to focus on practical efforts to move the above areas of focus forward in the course of an Intergovernmental Russian-Ugandan Commission on Economic, Scientific and Technical Cooperation meeting in October.

Sergey Lavrov and Jeje Odongo had a detailed exchange of views on the most important items on the global and African agendas. The ministers reviewed in depth the situation in the Great Lakes Region and other hot spots in Africa. They reinforced Moscow and Kampala’s mutual commitment to expand interaction and to coordinate positions at the UN and other multilateral venues. The ministers noted the constructive potential of the Non-Aligned Movement (NAM) soon to be chaired by Uganda for building a broad consensus with an eye towards creating a truly just and polycentric world based on the fundamental universal values ​​enshrined in the UN Charter. As an observer state in the NAM, Russia is willing to take part in this work.

Particular attention was paid to preparing and holding the 2nd Russia-Africa summit in the summer of 2023.

I would like to thank our Ugandan friends and hospitable hosts, above all President of the Republic of Uganda Yoweri Kaguta Museveni, for the warm welcome and meaningful and well-organised visit.

We spent several hours in detailed and substantive talks. We discussed all aspects of bilateral cooperation based on principled agreements reached by President of the Russian Federation Vladimir Putin and President of the Republic of Uganda Yoweri Kaguta Museveni in the course of their regular contacts, as well as conflict resolution issues in Africa and items on the international agenda.

President Museveni gave a conclusive, colourful and comprehensive overview of the history of our relations, which go back over 100 years since the period when Africa began to advocate decolonisation. Russia strongly supported the African countries and led the movement for independence, which ended in the early 1960s with the adoption of a corresponding declaration by the UN General Assembly.

In 1962, a milestone event took place in the life of the Ugandan people. They gained independence. Uganda was recognised by the Soviet Union that same year. We will mark the 60th anniversary of diplomatic relations on October 13. We agreed to plan for the appropriate observances.

We reviewed matters of economic cooperation. There are long-term plans in areas such as energy, geological exploration, mining, research and education, telecommunications, cybersecurity and agriculture.

We discussed projects related to cooperation in using nuclear technology for medicine and agriculture, as well as initiatives for future cooperation in launching a Ugandan satellite into orbit.

We agreed to work through these issues specifically and with an eye towards achieving practical results by the next meeting of the Intergovernmental Russian-Ugandan Commission on Economic, Scientific and Technical Cooperation to be held in October. Our preparations for the event will be based on the outcome of the Russian business people’s mission to Uganda that took place in November 2021.

We reached an agreement to consider the creation of a laboratory with the help of Russian specialists to jointly study matters of prevention and control of epidemiological diseases.

We reviewed in detail the international situation from the perspectives of the principles laid down in the UN Charter, of which the most important is respect for the sovereign equality of states. We share the belief that precisely this provision should guide us in addressing any problems that may arise in international relations.

The President of Uganda cited examples from his own practice as a politician. To a question whether he is a pro-Western or a pro-Eastern politician, President Museveni gave the only correct answer for a serious politician. Unfortunately, relapses into colonial thinking and the instincts for colonial policy can be seen in the Western countries’ policies that want the whole world to take a “with-them-and-against-everyone-else” stance.

We spoke in detail about the events unfolding in the international arena and in international politics that are related to the goals that the West planned to achieve by pitting Ukraine against the Russian Federation. We highly appreciate and respect Uganda’s responsible and balanced position with regard to the situation in Ukraine and related developments that are shared by other African countries. We discussed the underlying causes for the ongoing crises in the energy sector and global food markets that unfolded amid a wide-scale media campaign. However, our African friends are aware of what caused this state of affairs and that it is not connected with the ongoing special military operation. We agreed to be mindful of the current status of our bilateral relations and to look for opportunities (in the energy sector and agricultural trade) that will not depend on our Western colleagues’ whims.

We reiterated Russia’s support for the efforts being made by Uganda to advance cooperation within the African Union, to resolve the multiple ongoing crises on the continent, including the Democratic Republic of the Congo and the Great Lakes Region as a whole, South Sudan, Somalia and the Central African Republic.

Russia adheres to the principled position whereby African problems can only have African solutions. The African countries should be the ones to determine how to address a particular challenge, and the international community represented by the UN Security Council and other foreign states must help the African countries politically and help equip peacekeeping contingents with modern equipment.

We reaffirmed Russia’s position regarding talks on reforming the UN Security Council. We are convinced that the current Security Council is flawed in that the developing countries are not represented at all. This issue must be resolved by increasing the number of Asian, African and Latin American states represented in this leading UN body.

I thanked President Museveni for the warm welcome again. We will get busy preparing for the 60th anniversary of diplomatic relations. In this regard, I invited Minister of Foreign Affairs of Uganda Sam Kutesa to visit Russia.

Question: We would like to know what you think about the current economic crisis in the country because some sections of the globe think and apportion blame to Russia because of the ongoing war in Ukraine.

Sergey Lavrov: I have already replied to this question. I can say in addition that now our Western colleagues are blaming Russia for practically every problem.

This started long before the special military operation in Ukraine. Recall 2016: there is no Ukrainian problem but Donald Trump was “elected” by the Russian Federation. During the past six or seven years, the European Union said many times, without citing any evidence, that Russia “is using gas as a weapon,” and at the same time did everything it could to limit the gas pumping capacity of Nord Stream-1.

Not long ago, Poland refused to receive Russian gas directly via the existing gas pipeline. Ukraine has cut the volume of Russian gas through its territory in half. But Russia is “to blame” again. Nord Stream-2 is fully ready to meet Europe’s needs for this hydrocarbon, but it is closed for strictly political reasons. All investment in this mega project was made in full conformity with EU legislation, but as soon as everything was ready to open it, the European Commission retroactively (I emphasise this) adopted the regulations that are still being used to impede the operation of the gas pipeline that is vital for Europe’s energy security.

Now there is a lot of fuss about the Siemens turbine that was undergoing maintenance in Canada. Ottawa did not want to return it. Then, the German conglomerate managed to secure its return with the support of the German government. Nevertheless, nobody can explain to us clearly and on paper what the status of this and other turbines that are supposed to undergo maintenance in Canada is.

Now there is an uproar (I saw the latest news report) because Gazprom has to put one more pumping turbine on service. The European Union is going to hold an emergency session on energy during which we are bound to hear another portion of invectives against the Russian company. I have a simple question: are we urged to violate the existing regulations that ensure the safe operations of the gas main as is being done by German representatives, among others? I don’t understand how German representatives that are known for such national features as pedantry and orderliness can suggest violating the rules on which human safety depends.

The same is happening with the food crisis that started with price increases when the coronavirus pandemic broke out a few years ago. The Western countries began countering the consequences of this by printing weakly backed banknotes. Many other things that happened at that time reflected Western miscalculations in this area. We are aware of all this. The World Food Programme and the FAO have detailed reports on this issue.

The only link with the Ukraine situation in food security lies in the unlawful and aggressive sanctions imposed by the West on the Russian Federation. Restrictions concern the entire logistics, financial and transport chain that must be preserved and maintained for reliable Russian grain supplies to customers.

At the meeting in Istanbul on July 22 of this year, the Russian Federation and the UN signed a Memorandum whereby UN Secretary-General Antonio Guterres assumed a commitment to achieve the lifting of the restrictions I mentioned. This promise is recorded on paper. I hope the UN Secretary-General will manage to fulfil what he signed.

You asked me a brief question and it is taking me a long time to answer it because Western propaganda plants these slogans – “Russia is to blame for the energy and food crises” – into the public mind. All this is planted into the brains of the masses and they start to believe it. I tried to bring the facts to your attention to help you figure it out. There are also many other opportunities and publications that explain the true reasons behind the current situation in the global economy.