Russia will supply gas to EU in required volumes if its arms are not twisted : official 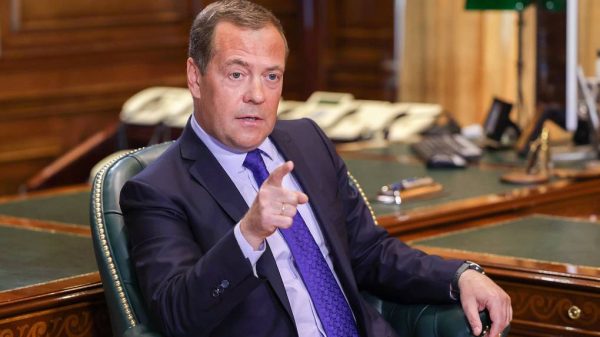 Russia will supply gas to EU in required volumes if its arms are not twisted : official

Inside Russia : Outside Russia : News Digest by the Embassy of Russian Federation in Bangladesh on August 27 2022

MOSCOW, August 26. /TASS/. Russia is ready to supply gas to Europe in contracted volumes if the West does not twist its arms by restrictions, Deputy Chairman of the Security Council Dmitry Medvedev said on Friday in an interview with France’s LCI TV Channel.

“We are ready to supply gas in volumes that were contracted even now. However, this will definitely depend on the position of Western countries, the position of European countries. If our arms are twisted, if payments are banned or the delivery of repaired turbines or the Nord Stream 2 launch is rejected, then supplies of this kind will not be probably in volumes the Western countries expect,” Medvedev said.

MOSCOW, August 26. /TASS/. The Russian government is working on a bill that would regulate entry, exit and residence of foreigners, Russian Security Council Deputy Chairman Dmitry Medvedev said on Friday.

He said at a Security Council meeting on migration policy that some issues in this area are systemic in nature and an integrated approach is needed to address them.

“So, a new comprehensive bill is being prepared, which should regulate the conditions for the entry, exit and stay of foreigners in our country,” he said.

Medvedev said the bill isn’t only about upgrading the equipment used by migration services, “but also about preventing serious threats caused by the current situation.”

“The control of entry, the rules regarding the residence of migrants on the territory of our country are an integral part of the security regime on our state’s soil. We are working in a completely different environment than a few years ago, and this must be kept in mind,” the official said.

Much has to be done in order to implement the memorandum between Russia and the UN on exports of Russian agricultural products and fertilizers, the Ministry said. “Despite statements made by Washington and Brussels that anti-Russian sanctions do not apply to foodstuffs and fertilizers, blocking obstacles to banking settlements, insurance and carriage of cargo occurred as a result of their introduction still remain in place,” the Ministry added.

Russia’s share in the global food markets structure is much greater than the Ukrainian one, the Ministry said. “In 2021, grain exports stood at 43 mln tonnes, while it is planned to increase this figure to 50 mln tonnes of products in this year,” the Ministry noted. “For the time being, 7-8 mln tonnes of fertilizers and raw materials sufficient to produce food for 100 mln people remain blocked at shipping terminals because of Western sanctions,” the Foreign Ministry added.

Settlements using the Kazakh tenge, Armenian dram and Kyrgyzstani som will be discussed at the Eurasian Intergovernmental Council

Russia plans to propose expanding the use of national currencies in trade settlements between the members of the Eurasian Intergovernmental Council (EAEU), news outlet RBC reported on Thursday, citing a draft of a Russian decree for the council meeting, to be held in Kyrgyzstan on August 25 and 26.

According to the document, the use of national currencies in mutual trade settlements is proposed in order to enforce economic sovereignty of national economies of EAEU members amid “changes in the architecture of international trade” and “global restructuring of supply chains.”

The document also proposes to expand the interaction among the national payment-card systems of EAEU member states, so that national debit and credit cards like Russia’s Mir and the Belarusian Belkart can be freely used in all EAEU countries. Moreover, it offers to introduce an alternative in exchanging financial information between EAEU countries’ banks without using SWIFT within the framework of mutual settlements.

According to the draft decree, the current share of national currencies in mutual settlements of the EAEU states in 2022 is 74%, and over half of the settlements are made in Russian rubles.

“Due to technical reasons, no applications for foreign passports with an embedded electronic microprocessor chip (for a term of ten years) will be temporarily received from August 26, 2022,” the ministry’s consular department said in press statement.

According to the ministry, resumption of application receipt will be announced on the department’s website and on the sites of Russian diplomatic missions abroad.

Only one in three UN members back new anti-Russia resolution

Ukraine’s latest proposal to condemn Russia has attracted the backing of just 58 out of 193 UN member states, a far cry from the number that symbolically supported Kiev in the General Assembly in March.

Kiev’s envoy to the UN Sergey Kislitsa heralded the proposed resolution on Wednesday, following the Security Council meeting convened on Ukraine’s independence day. The session featured a video address by President Vladimir Zelensky, for which the council had to override protocol requiring in-person appearances, and a series of statements by Western governments denouncing Russia.

Moscow’s envoy Vassily Nebenzia provided the counterpoint by introducing evidence of Ukrainian atrocities into the record and even naming Kiev’s western backers as accomplices in specific instances.

Kislitsa’s resolution also fell short of the support Kiev had back in March, right after the start of the Russian military operation. At the March 2 General Assembly session,141 member countries – or 73% of the UN – voted for a nonbinding resolution to condemn Moscow.

This week, however, that support stood at 30%, with no African, Persian Gulf or BRICS countries on board – and only two Latin American governments, Colombia and Guatemala, standing with Ukraine.

Moscow repeatedly warned NATO countries against meddling with the course of the special military operation in Ukraine, including by sending weapons to Kiev. While the alliance troops refrained from sending their soldiers, they decided to send dozens of billions of dollars in military assistance.

Head of the Russian Security Council Dmitry Medvedev has dismissed western claims that NATO is not involved in the ongoing conflict in Ukraine, accusing them of waging a proxy war against Russia at the hands of Ukrainians.

“The US and NATO are now practically embroiled in this conflict. They wage a proxy war against Russia making sure that the conflict [in Ukraine] never stops, supplying offensive weapons, ranging from small arms to multiple rocket launch systems, such as HIMARS,” Medvedev said.

Medvedev also dismissed fears of a Third World War erupting but noted that some of the first signs of potential global conflict could have already been witnessed. He added that the Russian special military operation in Ukraine serves exactly the point of preventing such a conflict.

The Security Council chairman also assured that Russia will not resort to an unwarranted use of nuclear weapons in the conflict and recalled that the country has clearly established transparent rules for using its strategic weapons. He noted that Moscow’s response to any threats will be consistent with the magnitude of that threat.

“But our response will be consistent with the size of the threats that are put forward against our country. Now the Russian Federation is conducting this operation precisely as a defensive operation,” he said.

Medvedev recalled the four justifications for the use of nukes by Russia, which are limited to: other countries’ use of such weapons; a launch of a nuclear missile targeting Russia; a strike against infrastructure controlling Russian strategic weapons; and an imminent threat to the country’s existence.

Despite claiming to get free from the Russian gas, the country is buying it from a German intermediary

The current Czech government has added the claim that the country is “at war” to the popular political mantra “we belong to the West.” However, the “only invasion that takes place in our territory is the invasion of our wallets”, Radio Universum writes.

Former Czech Foreign Minister Monument to Soviet soldiers being dismantled in Brzeg, PolandPolish authorities continue to demolish monuments that were put up after World War II in honor of the Russian liberators  Jan Kavan has shared his opinion on the standard of living of the Czech population and further price increases.

Kavan says that Czech politicians are “unapologetically obsessed with the idea of gaining independence from these Russian products”. According to the official, it is a recent obsession as the country is used to the fact that in the past it could obtain these valuable products relatively cheaply through the Druzhba pipeline. However, due to the recent policy, the state is de facto buying the Russian gas from a German intermediary instead of Gazprom.

“So, the Germans purchase it from Gazprom, and then for the extra money they sell it to us, so we actually buy it more expensively than we should. I see this only as a failure of Czech politics, I can’t help it. Even the Czech newspapers have started triumphantly claiming that if the European Union saves 15% of our consumption, we will become independent of the Russian supplier”, – he noted.

The former foreign minister emphasized that the Czech government, as well as many other countries, will not agree to the EU plan of 15% reduction in consumption.

“I am not talking only about Hungary, which does not participate, but also Spain, Greece, and Italy. In other words, we belong to the relatively less numerous countries, which are exaggerating”, – he said.

The minister recalled attending a meeting of Czech experts on gas, oil, economy, agriculture, where most specialists argued that it’s clear that when the ten-day technical shutdown of the Russia pipeline ends, the Russians will not restore the Nord Stream-1, saying that they would lose this income as well.

“We are automatically willing to believe the worst-case scenario when it comes to Russia, and then start pushing it while that scenario is only on paper or in our heads”, – he said.

When talking about a disruption of social peace in the number of countries connected to the energy crisis, Kavan noted that “unlike, for example, France, the Czechs are not a nation that allows itself to be provoked into protesting in the streets.”

“In this sense, the Czech nature is truly peaceful. We will sit in the pub and swear and complain and be angry, but we will not transform this anger into some protest action. That would have to be worse for us”, – Kavan added.

However, he noted, that in the current circumstances, with the price increases and the economy situation deteriorating from a day to day, it may change.

“If people in normal households pay 80,000 to 90,000 instead of 25,000, where do they take it? And if the increase in prices is reflected in all other areas – you already see energy, food, but also housing, transport and the like – then almost no one will be spared. And at that point, I believe that the breeding ground will be created for possible protests. I will be quite interested to see if in September the trade unionists will reach out for some warning signals, I’m not saying threats, but warnings that they could even go on strike”, – he said.

According to the diplomat, if the government will not act more effectively when it comes to helping the people, then “you can’t rule out that the unions will take the lead of worried and angry, fed-up people who feel they have nothing to lose”.

Despite voicing a certain distrust in the Czech government’s policies, Kavan insists on the fact that the authorities will find the necessary money for solving the heating problem, “in order to save themselves from possible riots”.