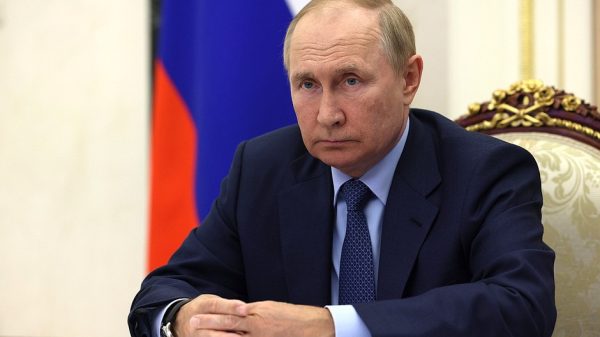 The President of Russia will visit the Museum and Theatre Educational Complex and will conduct an open lesson titled Talking of What Matters, which will be attended by the winners of Olympiads and competitions in the field of culture, art, science and sport.

Vladimir Putin and President of the Republic of Tajikistan Emomali Rahmon will take part, via videoconference, in an official ceremony to open five Russian-language secondary schools in Tajikistan.

After that, members of the Supervisory Council of the Russian Public-State Movement of Children and Youth will hold their first in-person meeting, chaired by the President of the Russian Federation.

That same day, Vladimir Putin will hold a working meeting with Kaliningrad Region Governor Anton Alikhanov and will visit a branch of the Nakhimov Naval School.

Vladimir Putin and President of Tajikistan Emomali Rahmon attend, via videoconference, the opening ceremony at five general education schools with instruction in Russian in the Tajik cities of Dushanbe, Khujand, Bokhtar, Kulob and Tursunzoda on September 1, 2022.

I will begin with what my good, longtime friend, President of Tajikistan Emomali Rahmon ended his speech – I will wish all of you a happy beginning of a new academic year.

By a good tradition, we – both Russia and Tajikistan – consider September 1 the Day of Knowledge and a day of celebration. Symbolically, on this day, the Republic of Tajikistan has opened five new schools with instruction in Russian, and, as was mentioned, based on Russian education programmes and standards.

As was also noted, President Rahmon and I agreed to implement this large joint project in 2019, and we have kept it under permanent control since then. I remember how Mr Rahmon criticised me, out of friendship, for not paying enough attention to areas of humanitarian cooperation.

Mr Rahmon, we are getting better.

President of the Republic of Tajikistan Emomali Rahmon:

Vladimir Putin: I believe we are attending a good, very kindly event today.

The new schools have been equipped based on the latest practices for organising the education process, and they meet the latest seismic safety requirements. They can withstand a 9-point earthquake, which is vital for Tajikistan. I would like to convey special thanks for this to the Russian engineers, designers and builders and all our Tajik friends that took part in building these schools.

Vladimir Putin had a telephone conversation with President of the Republic of Kazakhstan Kassym-Jomart Tokayev on September 1, 2022.

Vladimir Putin and Kassym-Jomart Tokayev discussed certain matters related to the Kazakh President’s State of the Nation Address delivered today. Vladimir Putin wished him success in the implementation of the major goals outlined in the address.

The leaders expressed mutual interest in the further development and deepening of Russian-Kazakh ties, including the agreements reached at the recent bilateral summit in Sochi.

The President came to the Central Clinical Hospital to pay his last respects to Mikhail Gorbachev, laying flowers at the coffin.

Mikhail Gorbachev died on August 30 at the age of 91.

“Your country has achieved widely recognised success in the economic and social spheres. Uzbekistan rightly enjoys great authority on the global arena, playing an important role in addressing topical issues on the international agenda.

Relations between our states are developing dynamically in the spirit of strategic partnership and alliance. I am confident that, through our joint efforts, we will further expand the entire scope of mutually beneficial bilateral ties. Without question, this would serve the interests of the friendly nations of Russia and Uzbekistan and be aligned with strengthening stability and security in Central Asia.”

The President held a meeting, via videoconference, with Government members on August 31, 2022 at Kremlin, Moscow.

In particular, Deputy Prime Minister – Chief of the Government Staff Dmitry Grigorenko reported on the situation with wildfires in some Russian regions. Acting Governor of the Ryazan Region Pavel Malkov also provided his comments on the issue.

Minister of Science and Higher Education Valery Falkov spoke about the results of the main stage of the enrolment campaign and the development of a national system of assessing the effectiveness of research papers.

Minister of Education Sergei Kravtsov reported on the schools’ readiness for the new academic year, and the Minister of Digital Development, Communications and Mass Media Maksut Shadayev spoke about the new digital services for the State Services portal.

Minister of Transport Vitaly Savelyev touched upon issues related to the implementation of the Safe and High-Quality Roads national project and the construction of a new road infrastructure.

Deputy Prime Minister Alexander Novak delivered the main report on the course of connecting properties to gas supply at no charge.

We have scheduled today to discuss issues related to so-called social gas supply. You will remember that in April 2021 we spoke about it and discussed it, after which we made certain plans. Let us review how this work is progressing today.

But before that I would like to speak on current issues. I want to start with battling the wildfires in different regions of the country. I know that Dmitry Grigorenko visited the sites alongside his colleagues and had a look. In some places the situation is changing, and it is generally changing for the better. However, new issues have emerged that require special attention.