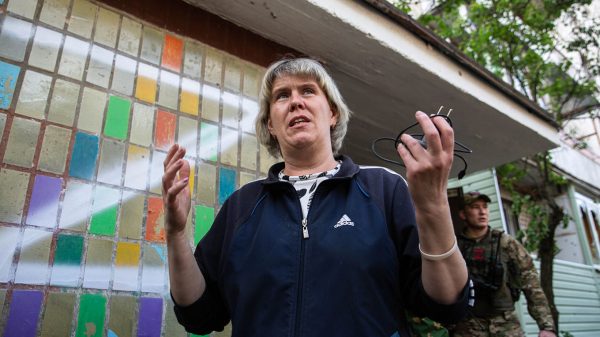 By Quentin Tyberghien for AFP
Russian forces edged closer Thursday to taking a key Ukrainian city after days of intense fighting, tightening their slow squeeze on the eastern Donbas region as Washington warned the war could last months.

The industrial hub of Severodonetsk has become a key target for Moscow, and the local governor said that 80 percent of the city was now under Russian control.

Ukraine stopped Russia from seizing Kyiv after its February invasion but the campaign in the east has had a high cost, with President Volodymyr Zelensky reportedly saying that up to 100 Ukrainian soldiers are dying daily.

“The most difficult situation is in the Lugansk region, where the enemy is trying to displace our units from their positions,” said Valeriy Zaluzhnyi, the commander in chief of Ukraine’s armed forces, according to a statement from the military.

“The enemy has a decisive advantage in artillery,” Zaluzhnyi told France’s top general, Thierry Burkhard, in a phone call, adding he wants his units to be equipped with weapons of the type used by the military alliance NATO.

“It will save the lives of our people.”

Ukrainian forces received a boost this week when U.S. President Joe Biden announced that more advanced rocket systems were on the way.

The new weapon is the Himars multiple launch rocket system, or MLRS, a mobile unit that can simultaneously launch multiple precision-guided missiles up to 80 kilometers away.

But analysts caution the new rockets are unlikely to suddenly turn the tables — not least because Ukrainian troops need time to learn how to use them effectively.

‘Fuel to the fire’

Kremlin spokesman Dmitry Peskov accused Washington of “adding fuel to the fire” with the new weapons, although U.S. officials insist Ukraine has promised not to use them to strike into Russia.

U.S. Secretary of State Antony Blinken said there were no signs of Russia pulling back its forces.

“As best we can assess right now, we are still looking at many months of conflict.”

West of Severodonetsk, in the city of Sloviansk, AFP journalists saw buildings destroyed by a rocket attack in which three people died and six others were hurt.

And on Wednesday, at least one person died and two others were injured in Soledar, between Sloviansk and Severodonetsk, AFP saw.

The European Union has also sent weapons and cash to Ukraine while leveling unprecedented economic sanctions on Moscow.

Germany said Wednesday it would deliver an air defense system capable of shielding a major city from Russian air raids, although it will take months to get to the frontline.

EU leaders agreed this week to ban most Russian oil imports but played down the prospects of shutting off Russian gas on which many member states are hugely dependent.

The sanctions are biting — a panel of investors said Wednesday that Russia has failed to pay $1.9 million of accrued interest on a sovereign bond.

And Russian energy giant Gazprom said its gas exports to countries outside the former Soviet Union dropped by more than a quarter year-on-year between January and May after losing several European clients.

Russia’s invasion of Ukraine has sparked a rethinking of security for many Europeans, with Finland and Sweden shedding earlier reluctance to join NATO.

“Tonight Denmark has sent a very important signal. To our allies in Europe and NATO, and to Putin,” Danish Prime Minister Mette Frederiksen told cheering supporters.

“We’re showing that when Putin invades a free country and threatens the stability in Europe, we, others, pull together,” she said.

Russia’s invasion — which is set to enter its 100th day this week — has killed thousands of people and sent millions of Ukrainians fleeing, but also risks triggering a global food crisis.

Ukraine — one of the world’s main producers — will likely export only half the amount of grain that it did in the previous season, the Ukrainian Grain Association said.

Before the game, Brazilian football legend Pele called on Russian President Vladimir Putin to end the “wicked, unjustifiable” invasion of Ukraine, in an open letter posted on Instagram.

“I want to use today’s match as an opportunity to make a request: stop the invasion. There is absolutely no justification for this continued violence,” said the three-time World Cup champion.