Secret documents on Bangabandhu to be an excellent resource for researchers: PM 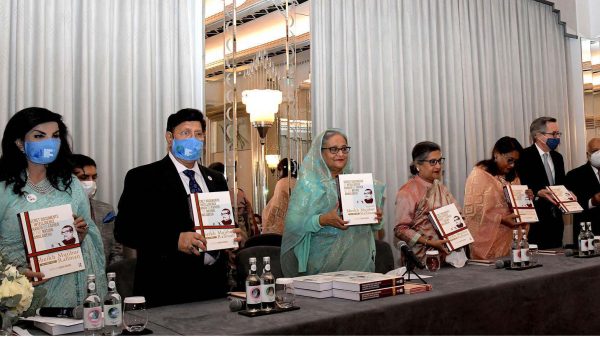 Secret documents on Bangabandhu to be an excellent resource for researchers: PM

Prime Minister Sheikh Hasina has said the publication of “Secret Documents of Intelligence Branch on Father of the Nation, Bangladesh: Bangabandhu Sheikh Mujibur Rahman” will be an excellent resource for researchers on Bangladesh’s politics and history.

“The real and complete history of the country from Language Movement to Independence will be found here….people across the globe will get idea about the sacrifice and struggle of Bangabandhu,” she said.

She made this remark while launching the international publication of secret documents of the then intelligence branch of Pakistan on Father of the Nation of Bangladesh, Bangabandhu Sheikh Mujibur Rahman at Claridge’s Hotel in London on Thursday.

Sheikh Hasina’s daughter Saima Wazed was present at the ceremony, among others.

The prime minister said this publication would provide useful insight for political leaders across nations and generations.

She said these are documents and records kept by the Pakistan Intelligence Branch on Father of the Nation Bangabandhu Sheikh Mujibur Rahman since Pakistan was created.

Stating that the Pakistan Intelligence Branch officials followed his every movement and activity, the Prime Minister said during the 24 years of Pakistan, Bangabandhu Sheikh Mujib served in prison for 3,053 days.

She also said it was not only Bangabandhu who was under watch, but also her mother Bangamata Begum Fazilatun Nesa Mujib was kept under surveillance.

“Especially after the six-point demands were announced in 1966 she was under the watch,” she added.

Sheikh Hasina said these Secret Documents are not just a record of Bangabandhu Sheikh Mujib’s political struggle, rather these are historic accounts of how an independent nation was born.

These documents have a critical importance for Bangladesh’s national history, she added.

The Prime Minister mentioned that these documents also showcase the immense sufferings and sacrifices of the Father of the Nation.

She said the documents are narratives of the making of a national leader, a statesman and an international political figure.

The Prime Minister said from the early days of his political life, Bangabandhu Sheikh Mujib was targeted by those who opposed the values and principles he stood for.

The same forces were responsible for the brutal end of his life, along with most of his family members, in August 1975, she added.

Sheikh Hasina conveyed thanks to Taylor & Francis Group for coming forward to partner with Hakkani Publishers of Bangladesh on these publications.

The prime minister said, “We renew our pledge to do justice to his struggles by realising his dream of building a ‘Sonar Bangla.”