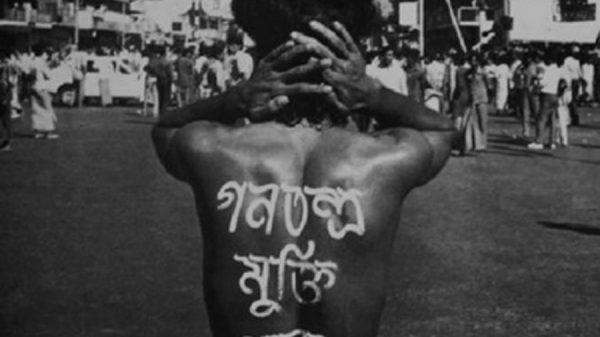 Shaheed Nur Hossain Day, a red-letter day to
restore democracy in the country, will be observed tomorrow with due
solemnity.

On this day in 1987, Awami Jubo League leader Nur Hossain, who imprinted
his bare chest and back with the slogans “Free democracy” and “Down with
autocracy”, embraced martyrdom in police firing during an anti-autocracy
demonstration at Zero Point in the city, now known as Shaheed Nur Hossain
Square.

AJL leader Nurul Huda Babul and farmers’ leader Aminul Huda Tito of
Bajitpur in Kishoreganj district were also killed in police firing during the
mass movement for restoration of democracy against autocratic rule.

The martyrdom of Nur Hossain and others during the mass upsurge of late
1990s expedited the anti-autocracy movement. In the face of the movement, the
then autocratic ruler had to step down on December 6 in 1990.

Since then, the day is being observed every year as the Shaheed Nur
Hossain Day.

Different socio-cultural and professional organisations as well as ruling
Awami League have chalked out elaborate programmes to observe the day in a
befitting manner.

Awami League’s programmes to mark the day include placing of wreaths at
Shaheed Nur Hossain Square at 8 am in city’s Gulistan area and offering of
special prayers seeking eternal peace of the departed souls of the slain
Awami Jubo League leader.

“The ‘November 10’ is the Shaheed Nur Hossain Day. This is an important day
in the history of restoring democracy in Bangladesh,” the President said in
his message.

On this day in 1987, Nur Hossain sacrificed his life while waging movement
in the city streets against autocratic rule, he said, adding, “Today, I
recall all the martyrs with respect, including Nur Hossain, who embraced
martyrdom for the country’s democracy”.

Prime minister Sheikh Hasina, in her message, recalled all martyrs, who
embraced martyrdom for the country’s democracy in 1987, with due respect on
the Shaheed Nur Hossain Day.

Many people, including Babul and Fattah, sacrificed their lives in the
movement of restoring democracy, she said.

Finally the democracy was restored on December 6 in 1990 with fall of the
autocratic ruler in the subsequent of the continued movements and struggles,
the Prime Minister said, adding subsequently the people got back their rights
to vote and food.

The premier prayed for eternal peace of the departed souls of all martyrs,
including Nur Hossain, and convoyed deep sympathy to the bereaved families.

In a separate statement today, Awami League General Secretary and Road
Transport and Bridges Minister Obaidul Quader urged the people all levels,
including party units, associate bodies and likeminded organizations across
the country, to observe the “Shaheed Nur Hossain Day” in a befitting manner.