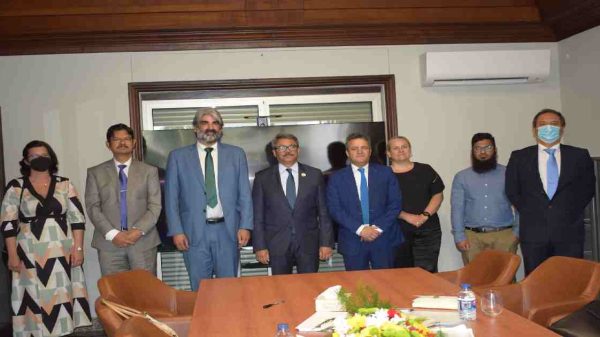 Bangladesh State Minister for Foreign Affairs Md. Shahriar Alam, received the Leixões Port Authority delegation, led by the President of its Board of Directors Eng. Nuno Araújo at the Embassy on 27 May during his visit to Portugal.

The State Minister apprised the delegation on Bangladesh’s existing port infrastructure and its further development opportunities to meet the regional and international requirements. The State Minister appreciated the efforts of the two sides for the ongoing efforts to connect Bangladesh and Portugal through direct shipping links.

The representatives of Port Authorities highlighted that this collaboration would create new prospects for fast, cost-effective and reliable shipping for the Bangladeshi exporters while sending regular consignments to Europe by sea during the exchange.

The State Minister expressed his satisfaction on the progress achieved towards signing an MoU between Chattogram Port Authority and Leixões Port Authority for the establishment of direct shipping link and the formation of a Working Group for the timely implementation of that MoU and assured his full support in this regard.

The Leixões Port Authority representatives further explored technical issues related to establishing direct links between the ports and discussed the feasibility of the said freight route.

Later that day, the State Minister met a business delegation from the ‘Business Association of the Lisbon Region’ (Associação Empresarial da Região de Lisboa – AERLIS) led by its Executive President Rui Jorge Rego. During the meeting, the state minister underscored the need of enhanced interaction between both business communities to tap the full potential of future trade and investment.

He suggested of establishing a Joint Business Council to further the cooperation.  Highlighting the investment friendly policies and incentives of the government, the State Minister invited the Portuguese Investors to make full use of the offered opportunity and invest in Bangladesh.

The business delegation commended the steady and continuing economic growth of Bangladesh and anticipated full support from the government for enhancing economic relation between the countries. A video featuring Bangladesh’s economic progress and potential was screened for the delegation at the meeting.

The State Minister also interacted with the members of the expatriate community in Portugal the day before.

Bangladesh Ambassador to Lisbon and other officials were present at both meetings.