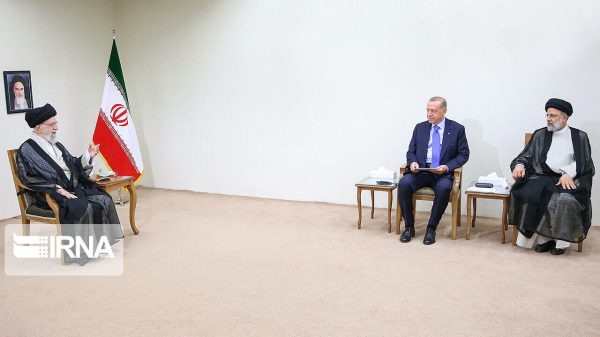 Tehran, IRNA – Supreme Leader of the Islamic Revolution Ayatollah Seyyed Ali Khamenei said on Tuesday that any military attack on northern Syria will definitely harm Turkey, Syria, and the entire region and is rather to the benefit of the terrorists.

The Supreme Leader made the remarks in a meeting in Tehran with visiting Turkish President Recep Tayyip Erdogan.

He urged the need for the issue to be addressed in discussions between the presidents of the two nations.

The Supreme Leader noted that the Zionist regime is the main cause of discord among Islamic countries while adding that the US and the occupying Zionist regime cannot stop the great movement of the Palestinian people.

Ayatollah Khamenei stressed that the end of the story will be to the benefit of the Palestinians.

He referred to the US support for the Zionist regime and reiterated that the honor and greatness of the Muslim Ummah rest upon vigilance in the face of divisive policies and passing behind the differences.

Despite some governments reaching out to the Zionist regime, the nations are deeply against this regime, the Supreme Leader said.

In response to President Erdogan’s expression of hatred for terrorist groups, the Supreme Leader noted that terrorism must surely be confronted, but a military attack in Syria will benefit the terrorists.

He also reiterated that the terrorists are not limited to a specific group.

Ayatollah Khamenei also welcomed a call by the Turkish president for a shared fight against terrorist groups by Iran and Turkey and said that Iran will definitely cooperate with Turkey in this regard.

The Syrian issue has to be settled through negotiations, Ayatollah Khamenei stressed, adding that Iran, Turkey, Syria, and Russia have to negotiate an end to the issue.

The Supreme Leader expressed satisfaction over the return of Karabakh to Azerbaijan. He however referred to possible plots to block the border between Iran and Armenia and said that if there is such a policy, Iran will oppose it as this border is a years-old corridor.

Urging the need for more enhanced cooperation between Iran and Turkey, Ayatollah Khamenei said: “We have always been defending your administration in internal affairs and in the face of interventions as well and as you said we are friends of tough times.”

Also speaking in the meantime, President Erdogan congratulated the Supreme Leader on the occasion of Eid al-Adha and Eid al-Ghadir.

Turkey has never remained silent in the face of the oppression against Iran, the Turkish President said, adding that the brotherhood between Iran and Turkey has to be intensified in all areas.

Noting that Ankara has always opposed the unilateral sanctions against Iran and will continue to do so, President Erdogan said that his country supports Iran’s legitimate expectations in JCPOA talks and encourages its companies to make investments in Iran.

Referring to long years of the fight of Iran and Turkey against terrorist groups, he said that in Syria, the terrorist groups have been receiving wide armed support from Western countries including, Germany, Britain, France, and the US in particular.

The Syrian government is expected to begin political processes, President Erdogan said, adding that the Syrian issue is especially on the agenda of the Astana Summit and we hope it will yield good results.