Taiwan addresses defense ties with US 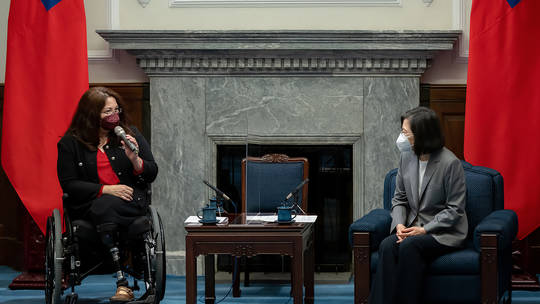 Taiwan addresses defense ties with US

Welcoming a delegation led by US Senator Tammy Duckworth, Tsai said Taipei is looking forward to “closer and deeper Taiwan-US cooperation on matters of regional security.” She added that Duckworth was one of the key sponsors of the Taiwan Partnership Act, “which received bipartisan support in the US Congress.”

“As a result, the US Department of Defense is now proactively planning cooperation between the US National Guard and Taiwan’s defense forces,” the Taiwanese President said.

Today I met with @SenDuckworth to explore opportunities for closer #Taiwan–#US cooperation in regional security, trade & investment. I deeply appreciate your staunch support for Taiwan & your sponsorship of legislation to strengthen our bilateral ties. pic.twitter.com/3jQ0xQXQDh

Duckworth, in turn, claimed that she has “a line of people” from the Senate Armed Services Committee willing to sign on to her recent bill, the Strengthen Taiwan’s Security Act.

“So while I want to emphasize our support for Taiwan’s security, I do want to say that it is more than just about military – it’s also about the economy,” the senator said.

Tsai and Duckworth’s statements came a day after the Taiwanese authorities reported China’s second-largest incursion into the island’s air defense zone this year. The Taiwanese Defense Ministry claimed that 30 jets entered the area on Monday, including more than 20 fighters. While Beijing has yet to comment on the latest incident, previously the Chinese government described similar episodes as drills aimed at protecting the country’s sovereignty.

China has consistently warned the US against military cooperation with Taiwan, which Beijing considers to be part of its territory. On May 27, Chinese Foreign Ministry Spokesperson Wang Wenbin accused the US of hypocrisy, constituting “severe threats to peace and stability across the Taiwan Strait.”

“The US said that it does not support ‘Taiwan independence,’ but it is not practicing what it says,” the spokesman said.

Last week, US President Joe Biden suggested that Washington would send its military to defend the self-governed island should China attack it. However, later both Biden and US Secretary of State Antony Blinken clarified the remark, insisting that Washington’s stance, which, among other things, includes respecting the so-called One-China principle, has not changed.

Taiwan is a self-governing territory which has been de facto ruled by its own government since 1949, when the losing side in the Chinese civil war fled to the island and set up its own administration there. Beijing considers the Taiwanese authorities to be separatists, insisting that the island is an inalienable part of China.

In recent years, top Chinese officials, including President Xi Jinping, have openly said that Beijing would not rule out the use of force to ensure the “reunification” of Taiwan with the mainland.

The authorities in Taipei have similarly warned that they would defend the island tooth and nail in the event of a Chinese invasion.