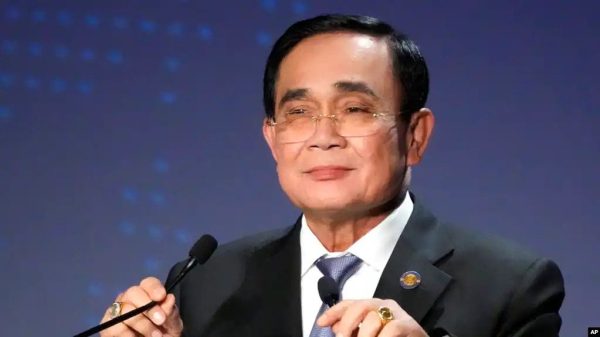 Protesters have called for the resignation of Thailand’s prime minister, Prayuth Chan-ocha. But now a court could be the one to decide his fate.

Thailand’s Constitutional Court has received a petition from opposition lawmakers on a legal term limit for the country’s prime minister, Prayuth Chan-ocha, triggering fresh political turmoil and street protests in the kingdom.

Some 171 members of the House of Representatives backed the petition, which asks the court to rule on an article in the constitution limiting the office of prime ministers to eight years. The court is yet to announce whether it will take up the case.

If so, it is uncertain what ramifications this would have for the prime minister. A temporary suspension until a ruling is issued is just one of the possible outcomes.

Street protests calling for the resignation of the prime minister have been ongoing over the past couple of days, with police having placed shipping containers to protect streets around government buildings in anticipation of a possible escalation on Tuesday.

Controversy about onset of Prayuth’s term

The court is asked to rule on the date that should be used to determine when Prayuth took office and consequently, how long he can remain in his present position.

The current prime minister seized power as an army commander in May 2014 after toppling an elected government in a military coup.

He led a military junta for the first months and was officiated in August of the same year.

His opponents believe this should be the date used to decide on the eight-year term limit, which the 68-year-old would then reach on Wednesday, motivating calls for his resignation.

However, his supporters argue he has only been the premier since 2017, when a new constitution was installed or since 2019, after he won a controversial national election.

If the court accepted this claim, Prayuth would have the legal framework to remain in office until 2025 or 2027, as long as he gained enough support during national elections.

The outcome is uncertain, but many analysts think the court will rule in Prayuth’s favor.

Increasing disapproval among the public

Critics of Prayuth have been questioning his political legitimacy over the past two years, while polls show that his approval ratings are at an all-time low.

The former army commander has remained in power despite major anti-government protests in 2020, a failed national response to the COVID-19 pandemic, a plummeting economy and political mishaps, but it is the constitution he helped install that could now cost him his office.

Fueling the fire, protesters have become upset by the economic stagnation and grievances inflicted upon their country during Prayuth’s time in office.

However, Prayuth and his coalition government have survived four no-confidence votes since the 2019 election, with the most recent one being held last month.

National elections are scheduled for March 2023, but the premier has the authority to call for an earlier date.

Prime Minister Prayuth Chan-Ocha was suspended from his job by a Thai court Wednesday, after eight years in office, which has sunk the kingdom deep into authoritarianism and brought widening inequality. The former army chief had seized control in a 2014 coup.

The constitutional court acted on a petition filed by the opposition that called for Prayuth to be suspended. This week, the former general reached the eight-year maximum term limit written into a new constitution that he helped drive through in 2017.

Reports say Prayuth has 15 days to respond to the suspension.

It is not clear when the nine-member court will hear the case and decide on whether Prayuth has overstayed his term. He cannot appeal the decision.

The suspension appears to have nullified a political settlement involving the 68-year-old Prayuth, who had vowed to contest general elections set for early next year. Instead, his deputy, Prawit Wongsuwan, also a former general and a serious power player in the country’s backroom politics, will step in as a caretaker.

Prawit “will be acting prime minister and the Cabinet remains the same,” Deputy Prime Minister Wissanu Krea-ngam told reporters after the court’s announcement.

“General Prayuth still has his Cabinet duty as defense minister,” he added.

The suspension of Prayuth, an army chief who has been battered by years of angry and sometimes violent pro-democracy protests, will have immediate effect.

Many Thai social media users voiced jubilation at the development involving Prayuth, whom many blame for overseeing a loss of democracy, free expression and a shrinking economy in favor of the establishment’s supporters in the palace and big business. Experts, however, were quick to warn of fresh perils ahead.

“The injunction is only temporary,” said Khemthong Tonsakulrungruang, a constitutional law scholar at Bangkok’s Chulalongkorn University.

“So, nothing is certain at this point. It could take a month before we know the final decision,” he said.

Thailand is yet to heal bitter divides between a ruling establishment shaped around the monarchy, military and business elite and a pro-democracy movement fueled by the rural poor and working class city dwellers.

Prayuth has repeatedly said he is a reluctant prime minister, called to office by duty to help cure the political wound at the heart of Thailand, which has seen endless rounds of political violence and coups.

He has, however, refused to bow to demands to leave, despite at times, massive pro-democracy demonstrations against his authoritarian rule — as well as increasing challenges from some erstwhile (former) parliamentary allies.

During his eight years in power, Thailand has also struggled to restore growth, which once saw the kingdom upheld as a Southeast Asian model of development.

The coronavirus pandemic and now the global inflation crisis have cut incomes in Thailand and left the public afraid of what may be coming next.

Pita Limjaroenrat, leader of the Move Forward Party, a key youth-facing opposition group, warned of a “political vacuum in times when Thai people need a strong leader the most.”

He said the appointment of Prawit, a 77-year-old career ally of Prayuth, as acting prime minister, does not solve the economic and political stalemate in the country.

“We need a leader who is agile, modern and responsive,” he told reporters.

“The court’s decision today to merely appoint an acting PM only shows that we keep going in ‘Prayuth’ circles instead of addressing the problem of Thailand.”

Groups of protesters gathered in Thailand’s capital on Tuesday to call for the country’s prime minister to step down, saying he has exceeded his constitutional term limit.

A demonstration at Bangkok’s Democracy Monument, a traditional protest venue, appeared to draw fewer than 200 protesters, mixed in with bystanders and journalists.

Anti-government activists have been seeking Prime Minister Prayuth Chan-ocha’s resignation for almost three years, saying he holds the post illegitimately because he came to power by leading a military coup that ousted an elected government in 2014.

They have fresh hopes that he can be thrown out of office because of an article in the constitution that limits prime ministers to eight years in office. They say the eight years ended on Tuesday, a day before the anniversary of Prayuth taking the post of prime minister in the military government installed after the coup.

But Prayuth’s supporters contend the countdown on his term began after 2014.

They say the current constitution, which contains the provision limiting prime ministers to eight years, came into effect on April 6, 2017, and that should be used as the starting date. Another interpretation favoring his continuing tenure is that the countdown began on June 9, 2019, when Prayuth took office under the new constitution following a 2019 general election. He must call new elections by next year in any case.

A petition from opposition lawmakers arguing that Prayuth has reached the eight-year limit was sent Monday to the Constitutional Court.

Polls show the prime minister’s popularity is at a low ebb. He has been accused of mishandling the economy and botching Thailand’s response to the COVID-19 pandemic.

In 2020, thousands of people took to the streets in multiple protests to demand that Prayuth and his Cabinet resign, while calling for the constitution to be amended and the monarchy to be reformed. The student-driven movement was sparked in part by the court-ordered dissolution of the popular opposition Future Forward Party.

The protest movement at one point attracted crowds of 20,000-30,000 in Bangkok. Several confrontations with the authorities grew violent. A legal crackdown on activists, arrested in many cases under a law against insulting the monarchy because of their criticism of the royal institution, has embittered Prayuth’s critics more.

The major faction of the protest movement, calling itself Ratsadon — The People — issued a statement Sunday affirming its call for Prayuth’s ouster.

“For more than eight years, Thai society has fallen under the darkest and most bitter times. A period under the rule of a tyrant who took power away from the people. A tyrant who inherits power through a mechanism without democratic legitimacy,” the statement said.

“We, the people, are hopeful that deep down, you, and General Prayuth’s cronies will come to your senses and realize that the time of General Prayuth as prime minister of Thailand has come to an end according to the 2017 constitution of Thailand.”

Fearful of protesters marching to Prayuth’s offices at Government House, security forces have blocked some streets with shipping containers, a tactic they have previously used against anti-government protesters.

At Democracy Movement, where the protest was set to end at midnight and resume Wednesday, a costumed dancer slowly whirled around lit candles placed on the ground while another protester burned Prayuth’s picture in a bowl together with items such as salt and incense sticks in a ritual curse. Firecrackers were set off and protesters raised a three-finger salute that has become their symbol of resistance.

“The people are suffering. It’s difficult to earn a living. Prices are rising. Oil prices are on the rise and eggs are expensive. Everything is expensive. Nothing is good right now. Prayuth shouldn’t run the government anymore,” said Manee, a 44-year-old protester who declined to give her last name for fear of retribution by the authorities. “He must get out.”