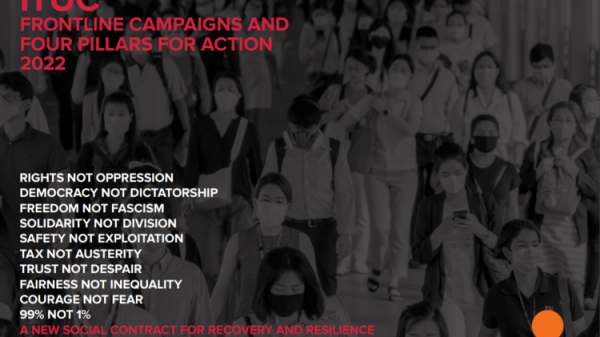 The ITUC General Council, at its meeting 30 November – 2 December, has taken the next steps towards the 5th ITUC World Congress, which will take place in November 2022 in Australia.

The Council discussed the first draft of the Congress statement, with a further draft due to be circulated to all affiliates in early 2022, and it approved a list of organisations to be invited to Congress.

The ITUC Frontline Campaigns and Four Pillars for Action 2022 was adopted, providing the foundations for Congress 2022 and framed by the demand for a New Social Contract.

The Council heard about countries that need particular attention from the ITUC in 2022:

The 2021 Dorje Khatri Award for Climate Justice, which recognises outstanding contributions to the fight for sustainability and just transition, was awarded to COSATU, FEDUSA, SAFTU, and NUMSA, all of which participated in the Presidential Climate Commission in South Africa, where just transition was agreed to be the foundation of a social pact.

This led to international recognition and agreement at COP26 in Glasgow with the Just Energy Transition Partnership and the declaration to support the conditions for just transition.