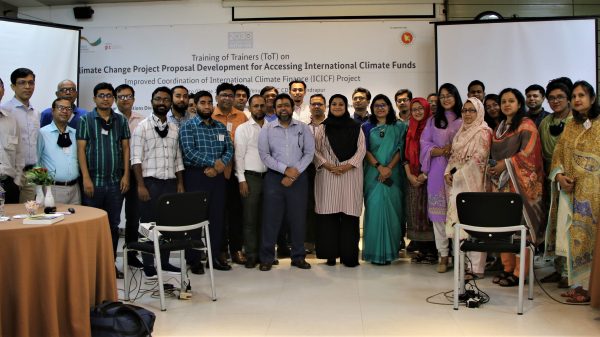 The objective of the ToT was to support the capacity strengthening of experts for accessing international climate funds through developing quality climate change project proposals.

The ToT, held from 27 May to 1 June 2022 at BRAC CDM, has been arranged under the Improved Coordination of International Climate Finance (ICICF) project supported by the SDG 2030 initiative of the Federal Government of Germany.

Bangladesh is awaiting a tough time ahead owing to the adverse impacts of the climate crisis, and it is one of the worst-hit countries. In such a backdrop, the country needs more climate funding to combat the impending crisis and mitigate the blowbacks.

The workshop covered a wide range of issues, including the role of the National Designated Authority (NDA) in managing the Green Climate Fund (GCF) as well as requirements for accessing the green climate fund (GCF), Global Environment Facility (GEF) and Adaptation Fund (AF). There were group works, interactive sessions, and open discussions in between different sessions.

Kabir Ahamed, Joint Secretary, Wing Chief, UN Wing, ERD, said, “Only preparing a project proposal is not enough; learning what needs to be included in a project proposal, what kind of challenges we may face and how a project can be implemented are also very important. We need to involve more stakeholders from the private sectors, especially NGOs and others who are working in the climate sector, in such initiative.”

Dr. Firdaus Ara Hussain, Principal Advisor, ICICF Project, GIZ, opined, “Bangladesh is the seventh most vulnerable country to climate change. In such a backdrop, this training has been arranged to strengthen the capacity of private and public sector representatives in developing climate change project proposals.”